On the 25th anniversary of its Japanese release, Gavin ponders why he just can’t get down with one of Nintendo’s most celebrated games of the 16-bit era…

There’s a strata of gaming classics so renowned for their quality that they become untouchable. Not liking, say, Ocarina of Time is cause for some serious self-evaluation and reappraisal; following decades of veneration from players and critics alike, all evidence suggests that you must be the problem here. Some games are unassailable. All that praise can’t be hyperbole if it’s near-universal, right?

I’ll occasionally sit down to catch up on one of those games–one of those what do you mean you’ve never seen Star Wars??!! type games–and it usually doesn’t take long to uncover the gold, even if you have to chip away at an outmoded, clunky mechanic or two. As someone who never owned a Super Nintendo back in the day, there have been several 16-bit classics I caught up with much later – Super Metroid and Earthbound, for example. Absolutely cracking games.

There’s one, however, that I’ve tried for many years to like. I’ve poked and prodded at it, dedicated entire afternoons and evenings to it, or dipped in for a few minutes in an attempt to spark a love that turns legions of fans misty-eyed. Nope, try as I might, I just can’t stomach Yoshi’s Island.

Obviously, it’s no skin off your nose if I’m not a fan of the beloved 1995 SNES classic, but it has been the cause of personal consternation over the years for several reasons, chief among them being that everybody else adores it.

Perhaps it’s because I wasn’t there at launch. Perhaps I’m missing a vital thread of childhood wonder and nostalgia.

Oh, they might concede that wailing Baby Mario is an irritation, but otherwise the game is one of those unimpeachable Nintendo classics. On paper, I should love it: its bold, crayon-like art style still looks gorgeous; its animation is something to behold; its soundtrack is as peppy and bouncy as Nintendo’s best. It’s got all the ingredients of an all-time great… but all it evokes from me is frustration and confusion. Playing Yoshi’s Island is a draining experience.

Perhaps it’s because I wasn’t there at launch. Perhaps I’m missing a vital thread of childhood wonder and nostalgia. I first played the GBA version of the game (the confoundingly titled Yoshi’s Island: Super Mario Advance 3) many years ago. Despite being a fine port, playing it years after the SNES release on a cramped portable screen may have affected my impression. Yes, that must be it, I thought – I must be missing something. 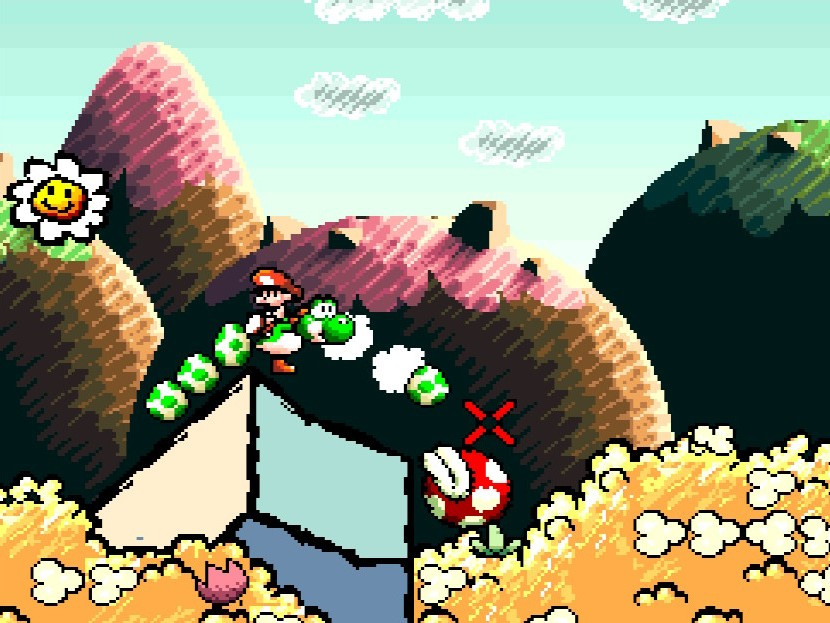 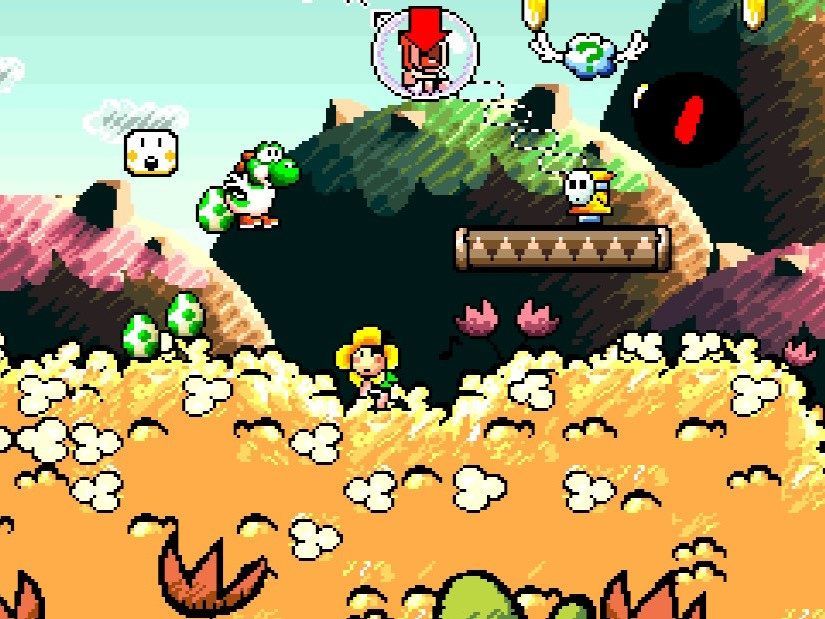 So, off to eBay I went to procure a Super Famicom copy of the game. On arrival, I tried once more to find the game everyone else seemed to love so much but, once again, I couldn’t get into the groove. Movement felt sluggish, Yoshi’s flutter jump irritated me, the egg-throwing mechanic further slowed things down and Baby Mario countdown timer was a mentally taxing nightmare. It’s the bubble that makes it worse; if the infant just dropped onto the floor, it wouldn’t be half as bad. Instead, he floats about, bobbling up and down and always–always–away from me when I quickly jump towards him. I hold down the button and Yoshi dips just as the bubble does. It’s utterly infuriating.

The name always wound me up, too: Super Mario World 2: Yoshi’s Island. I mean, it’s not, is it?

The name always wound me up, too: Super Mario World 2: Yoshi’s Island. I mean, it’s not, is it? In the same way that Wario Land: Super Mario Land 3 cheekily positioned itself as a sequel to a game that is mechanically very different, Yoshi’s Island is an offshoot, the start of a very different lineage of games. It’s fine – I understand why Nintendo would market it with that name – but it’s another reminder that I could be playing, you know, a good game.

Jokes aside, the recent Nintendo leaks have given us a glimpse of some fascinating prototype material from the game, including a human character who some say bears a resemblance to oft-forgotten Donkey Kong 3 character Stanley the Bugman:

Lots of interesting discoveries in here, including a pre-alpha (?) build of Yoshi’s Island called “Super Donkey” that starred a character who looked suspiciously like Stanley the Bugman from Donkey Kong 3. Someone needs to CTRL + F for the original Donkey Kong Country CGI models. https://t.co/PVxYd7vFb7 pic.twitter.com/e5AbzNVaR6— Kremling Kampaigner (@KRoolKountry) July 24, 2020

I’m not sure about the Stanley comparison, but the sprite in that prototype isn’t carrying a whining baby on its back, that’s for sure. Lucky chap.

The SNES version wasn’t available on any Virtual Console for a long time, but it was included on the Super Nintendo Mini and it’s now available as part of the Nintendo Switch Online subscription, giving me yet another way to play. I’m sure many of you will be firing it up over the next few days, and I went back again before writing this…

Nope, it’s not for me – I still don’t get the love. It’s sad, really – there’s a genuine feeling that I’m missing out on a treasure. It’s no biggy–plenty more games in the sea–but on the 25th anniversary of the Super Famicom release I’ll be once again be shrugging as people insist I just need to give it a chance. 25 years on and the game still looks marvellous and sounds great, too. But no, it ain’t happening for me.

Cheers to 25 years of Yoshi’s Island! Will you be playing it again over the next few days? Let us know your thoughts on this classic and the games you’ve tried to love below.