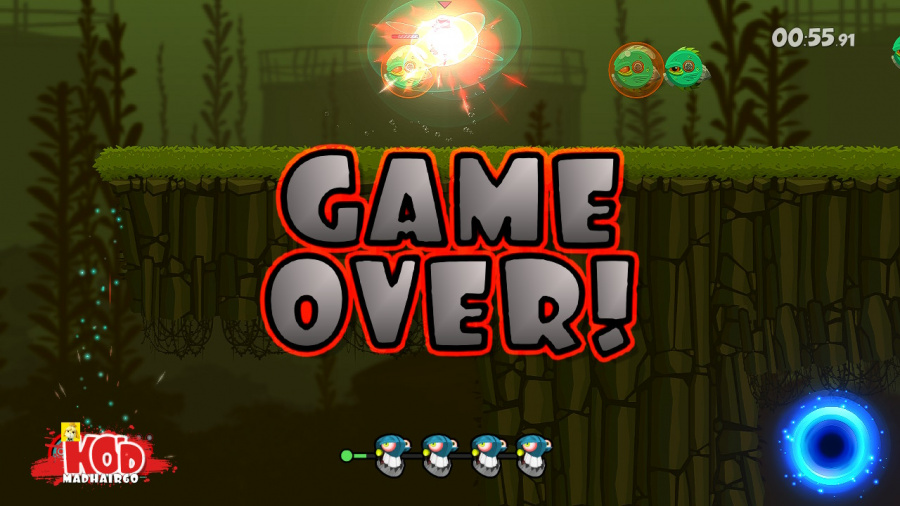 For a game evoking insanity in its title, Swimsanity! feels rather sedate at times, even when it’s casually erasing you from the face of the planet. It’s unforgiving, you see, but not in the positive, challenging sort of sense. Often, we’d see our entire team wiped in a matter of seconds by the unexpected appearance of a whale. We can’t recommend even trying to clear any of Swimsanity!’s Adventure Mode missions in single-player; this is a multiplayer experience through and through, but even with a full set of four players you’re going to spend a lot of time being demolished.

Yes, this is a game you’ll want to play with friends, if at all. Thankfully both local and online options exist, and it boasts full cross-play across all formats. Laudable, but we question whether or not people will be interested in what Swimsanity! offers compared to more established games.

First up, there’s the co-op Adventure mode, which sees you and up to three additional divers taking on any one of a handful of levels, each of which sees you traversing a different undersea stage and outmanoeuvring various entirely-too-big breeds of sea life. It’s sort of like The Little Mermaid, but with a lot less singing and a lot more death. Controls are ostensibly twin-stick, with the ZR button used to fire your basic laser gun. You can acquire explosives and fling them with ZL, while the B button offers a limited, short-range teleport that will get you out of dodge, saving your life more than once if used properly. Finally, as you play you’ll fill up a little bar that allows you to use your “Unleash”, a powerful skill that can turn the tides of battle. Pun intended.

You’ll gather power-ups as you play, but you’ll need to be coordinated to make almost any headway at all. Seriously – we can’t stress enough how challenging this game can be, and that’s just on the default difficulty. There’s a second, harder go-around if your first attempt wasn’t punishing enough, but alternatively, you can hop into the versus modes, of which there are plenty, and which hold a lot more appeal.

While none of the versus games on offer are especially unique, they are enjoyable. Besides your standard sort of Deathmatch modes (DM, team DM and “Last Mooba Standing”, which is exactly what it sounds like), there’s a rather great take on Capture the Flag where you must grab an on-screen orb and ferry it back to your capture point. Of course, taking a hit causes you to drop it, so things get silly in a hurry and it’s hard to imagine a group not having fun with it. The chaos reminded us most strongly of the under-rated Heavy Burger, which had a similar to-and-fro tug of war feel and was also strangely compulsive.

Playing these games will gradually see you achieving in-game challenges that award Gold Orbs, which will eventually unlock new Unleashes that let you experience the game in different ways – effectively giving you new character classes to try out until you find what works best for you. It’s not the most driving of video game structures, but you’ll reach many of the intended goals simply through playing, and local play is well-represented in the list if for whatever reason you’re limited to couch gaming.

Graphically, it’s just adequate. It simply gets the job done, but never really impresses. Thankfully it’s more to the game’s advantage that it looks fairly plain; you need to be able to tell what’s going on at all times, and there’s no danger of getting lost in the visuals here. The animation is a little poor with its “motion tweening” look, but movement and performance are both smooth so it doesn’t really matter that much. The music stands out – the work of composer Joshua R. Mosley, it’s a marvellously exciting and cinematic score that enormously enhances the game that it soundtracks. An eminently impressive effort.

While Swimsanity! is plenty of fun in local, not everyone has the capacity to play in any way besides online, and we’d love to see the game find an audience; crossplay should help with that, but even if you’re totally friendless and disconnected you can still play the versus modes with AI bots. Though we wouldn’t really recommend it be played that way.

A full-featured multiplayer effort, Swimsanity! excels in its frantic competitive gameplay, with a co-op experience that we found critically lacking in enjoyment. Skip the adventure mode and dive straight into Orb Rush with three friends for a good, fun time. The package holds together well despite some blandness to the visuals, and there’s certainly plenty to do if it gets its (fish) hooks into you. Swimsanity! holds up well in a crowded market and we truly hope to see it succeed.