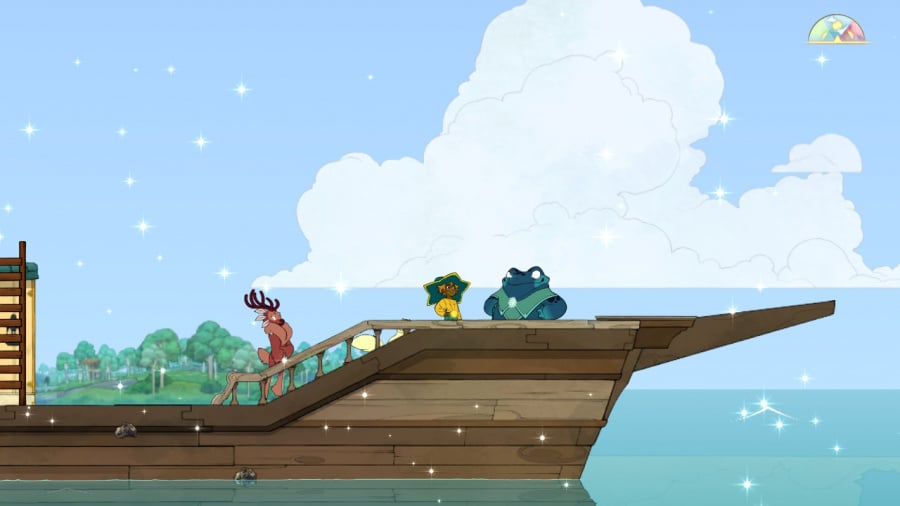 It’s not exactly rare for a game to be about delivering folks to their deaths – usually via high-calibre ammunition – but it’s certainly something new to see a game about ensuring a peaceful, fulfilling end of life. That’s what Spiritfarer is, and it’s certainly a unique thing; an instantly striking, benignly haunting little gem that’s more subtle than you’d expect for a title with such big ideas.

You control Stella (and, in co-op, her cat Daffodil), the titular Spiritfarer, on her journey to ferry – you guess it – spirits to their final, dignified rest as they pass into the next world. This effectively means you’ll be sailing the great seas of the afterlife, spirits in tow as passengers of your large floating vessel, gathering resources from the islands and inlets you happen across on your journey.

The first thing you’ll notice is the animation – it’s gorgeous. Everything and everyone just heaves with character, moves smoothly and convincingly, and is just generally charming to watch. The way Daffodil scurries around. The way Stella frowns at any particularly dubious dialogue. The spinning double jump you acquire. The way the passengers can embrace you in a warm, tight hug – it’s all fantastic, visually, and honestly up there with the slickest graphics we’ve seen on the Switch.

The visual effects as you sail through purgatory are pretty spectacular, too – a mini-game where you catch bolts of lightning in a bottle (yes!) is downright ethereal, and sequences in which you sail rapidly through shoals of floating jellyfish are similarly beautiful. It’s a striking, impressive game that manages to showcase a lot of superb character design and motion without feeling overdone or bloated.

As for the gameplay, it’s quite piecemeal, but fits together well. Disparate genres come together cleverly, and a general lack of pressure – you can’t die or really even fail, ultimately – means the whole experience is easygoing and eschews frustration.

There are elements of management sims; your boat can be expanded with a kitchen, a garden and so, which will allow you to produce food for your shipmates, some of whom ask for specific dishes that can only be acquired through fishing in certain spots, or heading to different locations for the right ingredients or construction material. As your ship expands you can rearrange its layout to your pleasing, which results in an environment that’s very uniquely yours; it’s a treat to hop and skip around your “base” as efficiently as possible, safe in the knowledge that it’s your own genius design that’s made things such a breeze.

Elsewhere, you’ll find shops selling valuable resources for your hard-earned Glims, and encounter more traditional Metroidvania character upgrades such as the aforementioned double-jump, allowing you access to previously-inaccessible areas that may house new upgrades, collectables or even a lost spirit to recover. In the early game, you’ll find there’s a lot of waiting while you sail from island to island, but this is in keeping with the relaxed, reflective tone of Spiritfarer. Besides, you can always pass the time with a little fishing.

As your boat gets bigger and busier, your multitasking skills will have to improve significantly. Thankfully, this only really amounts to time; as we’ve mentioned, there doesn’t seem to be any kind of fail state – it’s just not that kind of game. That said, we thought the opening few hours were almost suffocating in their linearity; it’s essentially a two-to-three-hour tutorial. It’s certainly not that it isn’t enjoyable, but we’d rather have been let off the leash, so to speak, a little faster. We’re not talking Mario & Luigi levels of “go here, do this” condescension, but it made us a little antsy, wondering when the game was going to really get going.

Which leads to the only other problem we had with Spiritfarer, which we’re not even sure is a problem, per se. Much has been made of the game’s emotional impact – being, as it is, about death – but we were unmoved by it, in that sense. That’s not to say we weren’t drawn into the game, but it was with the warm, satisfying glow of success and camaraderie than the bittersweet send-offs we had been expecting.

We’re not sure if this means we’re emotionless monsters, or if pre-release impressions have been a little over-zealous with their promises of streams of salty tears, but we think Spiritfarer is such a resolutely positive look at the heavy, heavy subject of grief that we can’t imagine it hitting any kind of painful note in its players. Certainly not by design, but of course personal circumstances will unavoidably feed into the experience.

A truly pleasant game, Spiritfarer balances undemanding platforming, gentle exploration and forgiving resource management with a beautifully-realised world with a cast full of charming, likeable, memorable characters. It’s a pleasure to move around in with an evocative, endearing atmosphere and a succession of gameplay styles that gel superbly and never feel like padding. It’s a long game, and you may find it becomes a little rote and repetitive before the end, but if it gets its hooks into you it’s a game you’ll want to go the distance with. Would it be distasteful to say it’s dead good?

Review: Takeshi & Hiroshi – A Short And Shallow Adventure Which Looks Better Than It Plays

Feature: Forget Saving Hyrule, Zelda: Ocarina of Time Is All About Fishing For Me