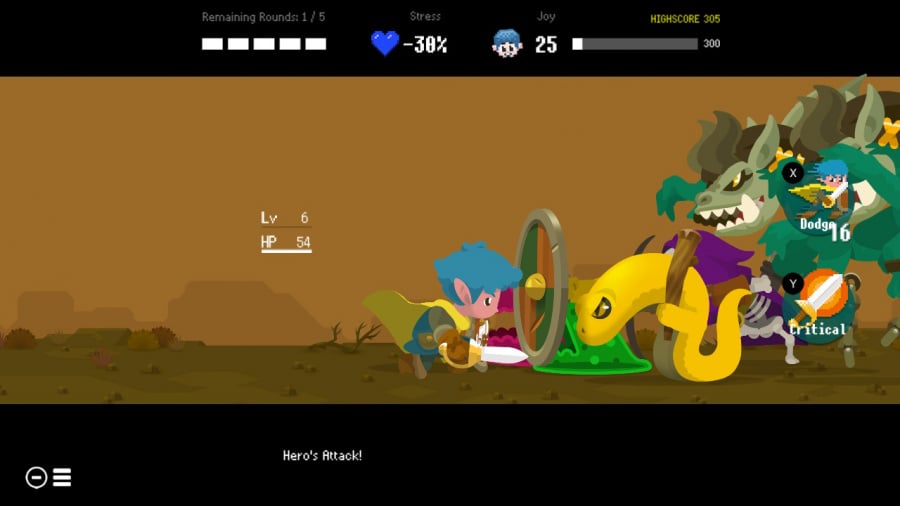 Originally released on Apple Arcade last fall, Takeshi & Hiroshi is one of the many smartphone games making their first jump to home console. The question remains, does an artistic experience designed for mobile gamers work on the Nintendo Switch? The answer is not as simple as one may think, as Takeshi & Hiroshi is closer to an interactive movie than a game.

The title revolves around a 14-year-old boy, Takeshi, who is an aspiring game designer creating a game for his brother, Hiroshi, to make him happy. At first, Takeshi is having trouble programming the game, but to not upset his brother, he begins to develop the game in real-time while Hiroshi is playing it. After Hiroshi falls ill and is sent to the hospital, Takeshi begins to dedicate himself to completing his game, working with his friends and rivals to create something his brother will love.

The story, while simple, was charming all the way through, but by the end became very predictable and formulaic. This is not necessarily a big issue, as the dialogue was engaging, even when the story fell a bit flat. For the most part, the player is only watching the characters during their daily lives, with the real gameplay occurring during the battle segments. There’s no interaction or dialogue choices to make between the player and the story, which is a real shame. While watching the story is easily the best part of the game, the lack of gameplay makes the player feel like an onlooker as opposed to someone who is physically in the game world.

The first thing players will most likely notice in Takeshi & Hiroshi is its unique puppeteering art style. Oink Games decided to use a mix of handcrafted puppets to represent the characters and a minimalist, monochromatic background to represent the environment. This decision highlights the expert crafting of the puppets and the puppeteering, as for the most part, the player is exclusively focused on the characters and the interactions between them.

Additionally, the animations and exchanges between each character have a great stop motion effect, accentuating each of the main puppet’s distinct traits. The same cannot be said for the gameplay segments, as instead of a puppet based look, it adopts a hand-drawn style. While there is nothing wrong with the actual character designs, having a more retro look could have gone a long way to make the transition smoother – especially considering the UI of Takeshi’s game is sprite-based.

As for the gameplay, there is very little to discuss because the player has little control over the game. The biggest issue with Takeshi & Hiroshi is how it’s not really a game. For the most part, players are just watching cutscenes, waiting until the next game segment, yet even those segments are barely interactive.

While the game gives off the impression of being a turn-based RPG, with clear inspiration from Dragon Quest, the only control the player has in the battle system is the choice of enemies Hiroshi encounters. Each gameplay segment is divided into five scenarios, each with a battle the player gets to decide. The goal is to raise Hiroshi’s joy meter over the threshold shown at the top of the screen before all five scenarios are completed. This is achieved by monitoring Hiroshi’s stress level, which corresponds to Hiroshi’s health bar. The higher the stress percentage is at the end of a battle, the more joy will be added to the joy meter at the top of the screen.

The player, however, only controls the number and type of enemies Hiroshi will fight, and nothing else. Later, a single use dodge and critical hit attack are unlocked, but since they are only used once per battle, the majority of time the player is sitting there watching the battle unfold. While this gives the illusion of watching someone else play the game, it’s incredibly boring from the player’s perspective, which later turns into frustration thanks to the addition of RNG elements and an infuriating checkpoint system.

Like a traditional RPG, there is always a chance for the player or the enemy to miss their attack. In a typical game, this would not be an issue, but when the player takes the time to plan out a battle to leave Hiroshi with as little HP as possible, having one miss can destroy a run. Even worse, the lack of checkpoints in between every match makes having to replay countless levels a frustrating and almost game-ruining experience.

The other biggest gripe with Takeshi & Hiroshi is the lack of overall content. The game roughly takes two hours to complete, with no post game content. There are only seven chapters, each with one gameplay section, and outside of a cute mini game, there is no other content. To combat this, the developers added a high score tracker to each level and a quick selection process on the main menu to replay the levels, but after the infuriating gameplay segments, there was no incentive to revisit any of the stages.

While Takeshi & Hiroshi may immediately grab you with its charming art style, the game itself is sadly quite lacking. From start to finish, the player will feel like they are watching an interactive short film, completely removed from the world. Combined with the frustrating random elements and the lack of overall content, Takeshi & Hiroshi does not provide enough to warrant a recommendation.