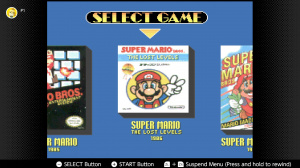 Now that SNES games are available on Nintendo Switch Online, we’ve decided to revisit each of them in a fresh review. Enjoy!

On its mid-1993 bow, Super Mario All-Stars was greeted with the sort of rapturous praise usually reserved for pontiffs, or a new Daft Punk album. This was a compilation of a generosity never-before-seen goodies, packing in the stone-cold classic NES titles Super Mario Bros., Super Mario Bros. 2 and Super Mario Bros. 3. Not only that, but each game had been remade; brand new and totally redrawn graphics taking advantage of the rich colour palette of the Super Nintendo, a save feature for each game and – best of all – the first western release of the Japanese Super Mario Bros. 2, presented here as Super Mario Bros.: The Lost Levels. 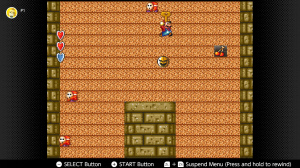 To play these games back then, it was either via the NES and original copies, or All-Stars. That made it an invaluable and unprecedented package. Now, though, the original NES titles – including Lost Levels – aren’t just widely available at an affordable price; they’re right there on the Switch’s NES Online app. So, the question arises – why play All-Stars on the SNES app when the originals are very much accessible?

We’re going to assume you’re familiar with the NES Mario titles – after all, you are a Nintendo fan – and we wouldn’t want to waste space explaining the basic mechanics of such widely-played classics. The best approach is to take a look at each game on Super Mario All-Stars individually and assess any meaningful differences, advantages and disadvantages.

Naturally, this begins with Super Mario Bros., where the Mario legend really started and recreated in 16-bit colour here. Unfortunately, it’s not an auspicious start. Due to a single error in the code, Mario doesn’t properly rebound off bricks when he leaps up to break them. This may sound very minor, and in some ways it is, but Super Mario Bros. is a game based around momentum and has very few mechanics. Changing one of them wholesale like this has a drastic effect on the feel of the game, as Mario seems to sink into the smashed bricks, usually resulting in a complete loss of speed. Is this picky? We honestly don’t think so. The visual update, which perfectly pleasant, isn’t enough to compensate for a fundamentally incorrect version of a platforming classic. 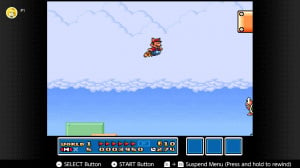 Thankfully, Super Mario Bros. 2 fares much better, with a graphical overhaul that doesn’t compromise its feel. The original NES version was the series odd-one-out already (it’s a reskinned version of the Japanese Famicom title Yume Koujou Doki Doki Panic, and not really a true Mario game at all), so a little aesthetic dissonance doesn’t jar with the player as much as it does in the other games. It’s worth pointing out that calling it the odd-one-out doesn’t actually reflect a distaste for it; in fact, Super Mario Bros. 2 is an excellent game with a sense of adventure and exploration to it that still sets it apart from every other Mario title. The All-Stars incarnation of this classic platformer improves its visuals, retains its gameplay and doesn’t compromise any aspect of what makes it so much fun. As a result, we consider it the strongest achievement of Super Mario All-Stars, and the best way to play Super Mario Bros. 2.

Still one of the very greatest platform games of all time, Super Mario Bros. 3 is by-and-large extremely enjoyable as a part of All-Stars, with the gameplay present and correct. The new graphics, however, are a bit of a mixed bag. Some areas look downright beautiful – richly redrawn and shaded. We feel, however, that some of the aesthetic decisions remove some of the joyously strange, abstract choices from the game; the cave levels, previously taking place in bizarre, twinkling void-like darkness, are now dull, relatively realistic brown rock. Additionally, the final few stages have been similarly changed from their oppressive jet-black finality to more standard, cosier backgrounds. This doesn’t ruin the game by any stretch of the imagination, and some of the modifications are actually pretty good (the airship stages now take place on a stormy night, with periodic cracks of atmospheric lighting) but overall it’s a little less interesting and a little more homogenous than the NES original. Nonetheless, this is a fine way to play what this writer considers the best Super Mario game of all time. 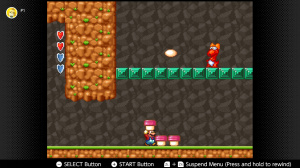 Which brings us to Super Mario Bros.: The Lost Levels, the Famicom Disk System sequel to the original Super Mario Bros. And it’s a bit of a doozy, with an amped-up difficulty level that surely inspired the fandom’s “kaizo” Mario hacks with their psychotically tricky stage design. Thankfully, Lost Levels isn’t on that level of cruelty, but it can be an absolute pig in places.

What doesn’t help is that this SNES version is a little bit botched, making certain stages harder than they were in the original – most notably any that involve mandatory enemy bounces. Still, the Switch version lets you save anywhere and rewind at will, which also lets you negate the mean-spirited reverse warp zones you may run into. Sadly, the same issue present in Super Mario Bros.’ All-Stars incarnation remains; breaking bricks simply feels wrong.

This is a little less of an issue here as speed is so rarely of the essence in Lost Levels; it’s so demanding that a slow and steady pace really is the order of the day. The graphics are acceptable, again, but we’d still recommend playing the Famicom version on the NES app over this; the ability to save your game natively as part of Super Mario All-Stars was useful on the original cartridge, but with access to save states it becomes far less crucial to anyone but purists who want to tackle the game as it was originally presented. More power to them, as Lost Levels/Super Mario Bros. 2 is a brilliantly-designed expert take on a landmark Nintendo title.

Super Mario All-Stars is quite obviously an extremely impressive package and the presentation still offers something of a nostalgic thrill – that opening sequence with the Mario cast chatting it up in silhouette is up there with the Super Street Fighter 2 intro for classic SNES attract modes – but, ultimately, we believe that it only offers the best experience possible with one of its four included games. It’s a very, very cool thing to have as part of the SNES Online service and an important watershed for retro compilations that’s a treat to revisit – but only really out of curiosity. Great stuff, but we say stick with the NES originals. The major problem with Super Mario All-Stars on Switch in 2020 is that it’s on Switch in 2020; the benefits it conferred over the original 8-bit games back in ’93 are rendered somewhat moot by the user-friendly functionality of the NES app that’s already available.

Talking Point: Nintendo’s Focus On Younger Players Is A Positive, Not A Negative