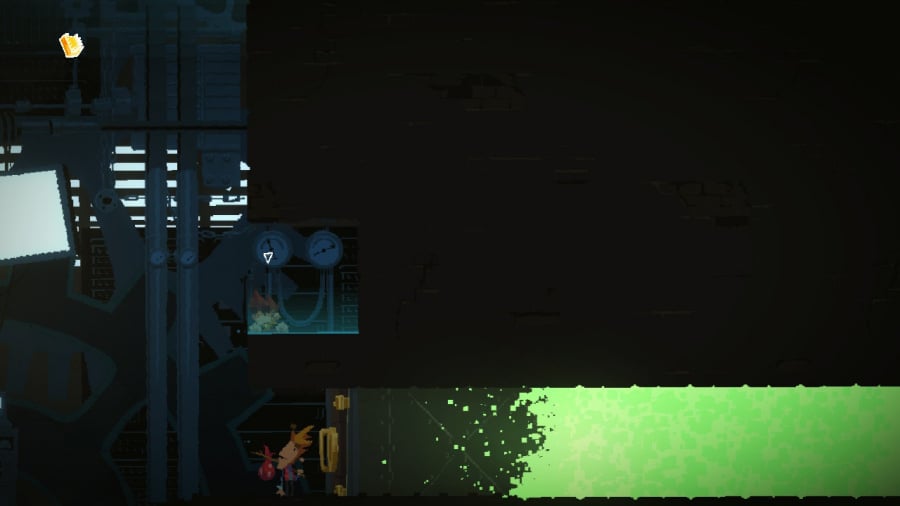 Eleven years after their time-travelling adventure, Ben and Dan have returned in Lair of the Clockwork God, a genre-melding mash-up of their classic point-and-click antics with the more en vogue indie platform game – an uneasy styles clash that’s humorously weaved into the very meta-narrative.

Having taken keen note of modern trends, Dan has taken on a new persona – rejecting Ben’s fastidious adherence to adventure game tropes in favour of becoming a platformer hero, complete with periodic upgrades to his move set, including the evergreen double jump.

The crux of Clockwork God’s gameplay, story and puzzles all stem from this uneasy dichotomy; early in the game, for example, adventurer Ben encounters a minuscule raised step and refuses to climb it, as doing so would be the actions of a platforming hero – not a wannabe Guybrush Threepwood like him. How do you get Ben over this impassable step? Well, it involves the discovery of an entirely new type of gravity, desecrating the corpse of a clown and, er, urinating. Mostly, though, it requires the player to switch to Dan for a bit of Super Meat Boy-esque platforming fun. Where Ben inspects and combines – sorry, crafts – items, Dan climbs walls, dodges spikes, collects trinkets and runs gauntlets.

It’s a piecemeal, awkward approach by design, but we couldn’t help but wonder if that really excused it. Making jokes out of the awkwardness papers over the cracks to an extent, but it reminded us of A Bard’s Tale: Remastered and Resnarkled – you can wise off about weak, tired gameplay all you want, but if the player still has to endure it, there’s a problem. Initially, this didn’t sit too well with us.

The keyword, though, is initially. The earliest segments of Clockwork God set it up for us as a bit of a disappointment; traversing the same ground with both characters felt time-consuming, and the puzzles seemed to be variations on having each character stand on a switch to lower a platform for the other one. Thankfully things pick up relatively quickly, and once Dan gains the ability to give Ben a piggyback, the issue of retracing the steps of each character with the other is solved.

It’s a little strange, then, that Ben and Dan spend a good amount of time entirely separated. You’d think the game would capitalise on its unique premise, but no. These individual platforming and adventuring sections are well-designed and consistently entertaining but suggest perhaps a lack of confidence in the genre-welding. The mutual Ben/Dan gameplay is the best and most interesting part of the game, and it would be great to have seen it used consistently.

One thing that Clockwork God is rightly confident in, however, is its humour. It’s very funny and very British. On occasion, it strays a little too far into somewhat hypocritical jabs at other games, but the brunt of the joking remains Ben and Dan themselves; both the characters and the real-life people behind them. The ideas behind each different scenario are strong and inventive; you’ll want to see what they come up with next.

The controls are smartly designed; with Ben, you directly control him but use a context-sensitive menu to have him perform his look/talk/pick up actions when he passes the right hot-spots. Dan’s platforming controls are more traditional, though we experienced a few dropped inputs on jumps, leading to deaths and repeated sections.

Thankfully checkpoints are plentiful, but technical issues seem to be a bit of a plague on the current incarnation of Clockwork God. The title screen promises a forthcoming update, but as the game is now, it frequently chugs and hitches in Dan’s platforming levels; we experienced full-second freezes every time we passed a checkpoint, sometimes when we were mid-jump. The chugging framerate reduces the freewheeling enjoyment of an early Sonic-inspired level; a central joke mocking product placement in old platform games (think Zool‘s Chupa Chup endorsement) is very funny, but difficult to appreciate at what feels like a fluctuating 20 frames per second.

Despite these issues – and taking into account the promised patch – Lair of the Clockword God is, much like Size Five’s previous heist-’em-up The Swindle, an attractive game to look at. It’s a huge step up from previous Ben and Dan games in its looks, with great character designs, a good sense of scale and pleasing use of colour to create an atmosphere that doesn’t outshine the game’s down-to-earth comedy.

Packed in with the game as a bonus is the visual novel prequel Devil’s Kiss, telling the story of how Ben and Dan first met at school. It’s as silly and breezy as the main game and with plenty of good laughs, so be sure not to miss it.

Lair of the Clockwork God is a difficult one to score. What it does well is brilliant – the humour is great, with constant jokes both quickfire and slow-burn – but the gameplay is a more complex matter. While it’s not bad by any reasonable metric, it is awkward in places. But, then, this is intentional and comes part and parcel with the story, so do we treat it more leniently? Is there some hubris in presenting a flawed game, but distracting from said flaws by making them… kind of the point? It’s a question that not even Nintendo Life can truly answer, but we can put a big number under a review of the game. We do our part.