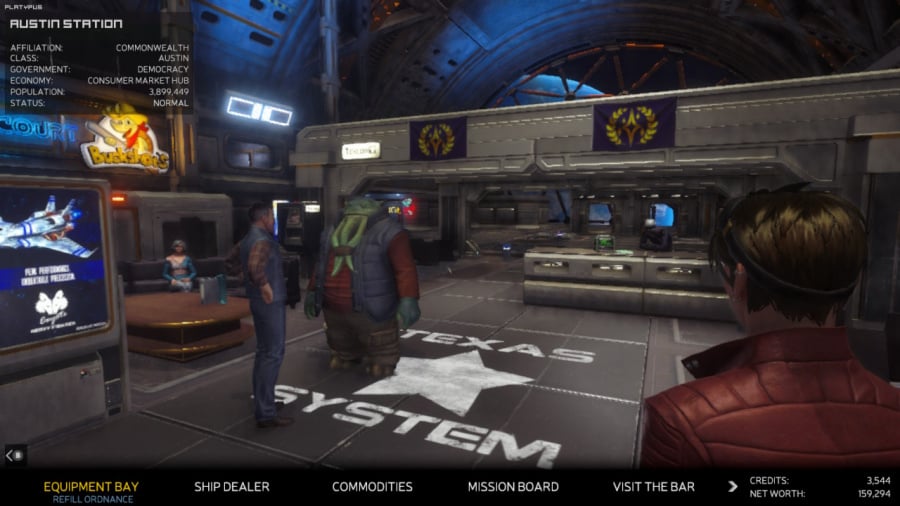 Rebel Galaxy Outlaw, Double Damage Games’ prequel to 2015’s Rebel Galaxy, brings a much-needed slice of old-school space sim action to Switch with swagger and style to spare. Following the fortunes of battle-hardened rebel Juno Markev, whose husband has been murdered and ship destroyed as she escapes an attempt on her own life, this is a gritty space-western tale of revenge and redemption which sees you gather intel from seedy blue-collar bars and their shady denizens as you attempt to locate your would-be killers and exact some bloody retribution.

Right off the bat, Rebel Galaxy Outlaw gets off to a strong start with core dogfighting action that’s surprisingly fun and frenetic stuff due to the inclusion of a clever auto-pursuit function. This neat addition, which you engage by simply holding in ZR, manages to successfully replace the usually laborious task of manually orienting your craft in order to tail your foes by allowing you to auto-lock to their every move, twisting and turning in unison with their ship. It really is a revelation; such a simple idea, but one that transforms combat encounters from the traditionally long-distance, frustrating and often time-consuming experiences into taut, fast-paced, close-range battles that are actually thrilling to get involved in.

In addition to this auto-pursuit function, Rebel Galaxy Outlaw also allows you to jump into a combat map of your surrounding area at any stage of a battle, pausing the action and highlighting all nearby enemies, giving you the ability you to auto-lock to their ships and return to the fray ready to pound some filthy space pirates to dust. The combination of these two functions ensures that the combat here is so much less confusing – and so much more straight-up fun – than what we’ve come to expect from a lot of this genre.

Getting in tight behind an enemy ship is easy and immediate, and blasting them with your lasers or gauss gun before locking on with a guided missile that turns them into a giant fireball – which you then speed spectacularly straight through the middle of – never really gets old, and it’s an experience that’s added to immensely by the game’s excellent soundtrack.

There’s over twenty-four hours of music split between several radio stations to enliven proceedings here, each with their own GTA-style parody advertisements and, although the game defaults to country and western and rock tracks that perfectly complement its hard-living, blue-collar world, we found ourselves tuning into the Latino and classical music offerings; it turns out blasting the crap out of enemy ships as Ride of the Valkyries plays in the background just never gets old.

The effort and attention to detail displayed in terms of the musical side of Rebel Galaxy Outlaw extends to all other elements of the grungy little world Double Damage has created here. Ships are suitably weathered – your first really is an absolute heap of junk – space stations are populated by untrustworthy scum who always have a little info for the right price and striking up a conversation with nearby crafts always results in some pleasing hillbilly chatter that really helps sell the world in which this story takes place. Indeed, making radio contact with other ships is another clever little gameplay wrinkle, giving you the chance to talk your way out of a confrontation when you’re outnumbered, order a freighter to drop its valuable cargo or just say howdy to a neutral merc as you roll on by.

As you take on story missions and meet new contacts and characters throughout the world, you can also have them join you as a buddy on sorties, calling them in via your ship’s radio in order to help you out of a sticky situation. They can only be hired out for a short amount of time, and there’s a cooldown period after each use, but they do a pretty good job of providing backup when you’ve got yourself in some deep trouble with local law enforcement or have a bunch of pirates looking to relieve you of the contents of your cargo hold.

Alongside its core combat, Rebel Galaxy Outlaw also provides plenty of other shenanigans to get involved in, including a dynamic economy system which enables you to trade goods scavenged from contract kills and hold-ups. There’s a black market where you can sell counterfeit and illegal items for big bucks, and mining which provides a steady income for those who like to keep things as peaceful as possible.

All of these money-making aspects then feed into an upgrade system which sees you add vital tech to your ship, upgrade weapons and defences or buy one of the eight other craft that eventually become available as Juno’s story progresses. Upgrading adds plenty of longevity here – some of the top-tier tech costs an absolute fortune – and, although we would have loved to see a bigger selection of ships to choose from, it gives the core gameplay loop some much-needed direction and purpose.

Of course, whether you get busy trading peacefully, indulging in bloody piracy or even decide to join a Merc or Merchant’s guild for a steady flow of side missions, you’ll eventually need a little downtime to recharge the old space-batteries and Rebel Galaxy Outlaw provides plenty of entertainment in this regard. Pull up at a space station or intergalactic casino, jump into the bar and you’ll be greeted with dice-poker, slot machines, a Starvenger retro arcade cabinet and an impressively well-realised 8-ball pool simulation. In short, there’s plenty of fun to be had as you chill out between side missions and story sorties here and gambling with your hard-earned cash, winning big and upgrading off the back of a lucky game of pool or a dice-poker streak always feels awesome.

This really is a pretty hard game to knock in all honesty; a very well-priced indie space-sim effort that successfully manages to cut away a lot of the inherent flab of the genre, serving up a wonderfully grubby little galaxy that’s easy to sink an absolute ton of time into. There are a few negatives here and there, however. Juno isn’t a particularly interesting protagonist and, although she doesn’t really need to be hugely complex in such a straightforward revenge scenario, she ends up coming across as pretty nasty and one-note overall (she also curses constantly which begins to really grate after a while).

The central story itself doesn’t really go anywhere particularly interesting, either. It is a perfectly serviceable backdrop to the core combat action, just don’t go in expecting huge revelations or twists and turns that keep you guessing or captivated in any truly meaningful way. These minor irritations aside, however, Rebel Galaxy Outlaw successfully nails most of what it sets out to achieve and Dodge Sector is just a wonderfully atmospheric slice of space to get lost in.

In terms of this Switch port, we’ve been impressed overall. Things are obviously a tad blurrier than other versions of the game, but the action maintains a rock-steady framerate, it looks a pretty much perfect match in terms of graphical detail for other ports and the controls are pleasingly responsive and tight. In both docked and handheld modes the quick-paced dogfighting action is easy to follow, text is clear and readable and there are motion controls included – although as far as we can tell these only actually affect rolling your ship.

There really aren’t too many space sims to choose from on Switch just now but, if you’re hankering for some old-school Freelancer or Privateer-style action and you’ve already had your fill of the excellent Everspace, Rebel Galaxy Outlaw is a top-notch choice and a fine addition to a genre that’s been pretty underserved so far on Nintendo’s hybrid console.

Rebel Galaxy Outlaw is a wonderfully well-realised and stylish slice of space-sim action set in a satisfyingly seedy galaxy full of untrustworthy scum and illegal activity. The dogfighting action here is wonderfully tight and engaging thanks to the game’s clever auto-pursuit mechanic, resulting in explosive ship-to-ship combat that allows you to get up close and personal, tracking your prey without much of the laborious fuss of other efforts in the genre. Juno Markev may not be the most exciting of protagonists and the story doesn’t really come to much in the end, but there’s a ton of side missions and a dynamic economy and morality system to keep you busy as you slowly unravel the mystery behind who killed her husband and left her for dead. Overall, this one’s an easy recommendation for space-sim fans, dogfighting fiends and anyone else looking to indulge their inner space rebel.