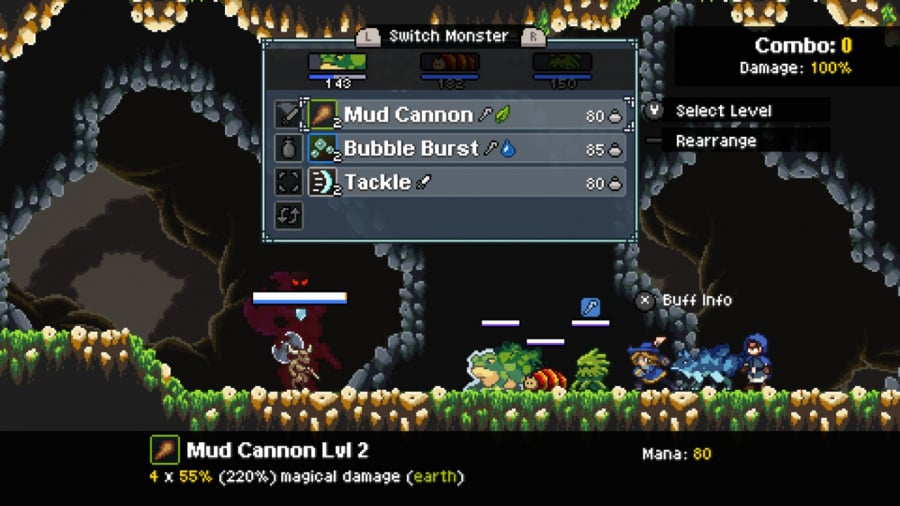 When disparate genres come together, it’s the hope of any reviewer that they’ll be able to deploy the traditional “peanut butter and jam” simile. Styles that ought to clash like the wrestling finisher of the same name often synchronise beautifully, with the likes of Crypt of the Necrodancer or the more recent Lair of the Clockwork God brilliantly fusing the rhythm/roguelike and point-n’-click/platformer genres to greatly entertaining effect. Monster Sanctuary aims for a similar alchemy between the ever-popular Metroidvania and… erm… Pokémon. That is, the kidnapping and subsequent enforced violence between a host of critters. And, disappointingly, it’s closer to peanut butter and wholetail scampi. Actually, that sounds like it might be kind of good. How about peanut butter and… er… hats? Both great in and of themselves, not such a superb match unless you’re trying to attract squirrels. Which, in-game, we suppose you could well be.

It’s all rather nice-looking, with SNES-style pixel graphics demonstrating well-drawn sprites and backgrounds, but it’s all a little bit familiar. The locations you’ll visit aren’t particularly novel or memorable. A forest. A cave. A different cave. It’s function over form, but contributes to a somewhat banal aesthetic. Thankfully, though, visual spectacle isn’t the point of Monster Sanctuary. What, then, is the point? Well… good question.

The platforming sections are basic, but enjoyable, with large areas that connect logically as well as plenty of locked-away treasures that require the field skills of a particular monster to access. Much like the HMs of Pokémon yore, you’ll need to use these skills to burn up vines, break down walls, or simply achieve air by hitching a ride with your flying friends. These are smart, thoughtful uses for the monsters you’ll gather, and makes them feel like something more than just options in a menu. It’s a little rudimentary as most of the functions effectively amount to “key in door” – and there are plenty of keys to find in order to open doors, too.

Capturing said monsters for your personal use is a matter of acquiring eggs when enemies drop them in combat, which when you think about it is a touch macabre. You can, of course, rename your little tykes à la Game Freak’s ever-popular money pit, but that’s about where the meaningful comparisons end, as Monster Sanctuary is a very different kettle of fish.

As you move through the extremely traditional Metroidvania map, you’ll encounter free-roaming gangs of monsters; no random battles here. Running into them will initiate a battle, and it’s this pugilism that makes up the lion’s share of your gameplay. Battles in Monster Sanctuary ain’t short, and if you want to level up your crew, you’re best off initiating every single one you come across. What this amounts to, in our experience, is lots and lots of long, slow fights. On average, we found it takes about three turns to defeat a single monster, and every battle is three-on-three, so that’s a lot of turns if you allow for enemy buffs and healing. Of course, this does vary, but we didn’t find anything we’d call straight-up “fodder”. There’s an option to play the battles in double speed, but honestly this really doesn’t make it that much better.

Taking the length of the battles aside, though, there’s a lot of meat on the bone in Monster Sanctuary; min-maxing your team’s stats could become an obsession, given that there are multiple skill trees for each beastie and plenty of held items/accessories to customise your onslaught even further. It’s all totally transparent, too; skill trees are laid out with full explanations of every variable, and even individual attacks during battle will show how much damage you’ll do before you strike. On one hand, this is a stat fiend’s wet dream, but on the other, it can make the whole thing feel about as rote as its environments. There are no real surprises, nothing to raise an eyebrow. We feel like there isn’t meant to be, but the result is a game that’s going to appeal to a specific subset of gamers who will likely pour hundreds of hours into it, wanting to see every possible permutation of a team, every available skill, every dropped loot item. There is what feels like a bottomless well of potential, and if that’s the sort of thing that interests you, this is an instant and vociferous recommendation.

An expansive and content-packed game, Monster Sanctuary would be easy to criticise as a grind if we didn’t find that said grinding was never really necessary to enjoy it. It’s a difficult one to review because a lot of what this reviewer personally found a little boring is exactly what’s going to appeal to its core audience of number-crunching statisticians. While Monster Sanctuary’s is a little plain at the outset, the right people will find it one of their favourite games of the year. It’s a total timesink, but that’s a term that implies said time is being wasted, when it really isn’t. Every fight is pushing your team forward, and the potential for maximising the efficiency and power of your squad is seemingly infinite. It can feel more like organising a spreadsheet than playing a game at times, but it’s impossible to deny that it’s an accomplished game with a lot to offer – and that’s without even taking it online to battle other players. If you like min-maxing, feel free to add a point or two to the score below.

Preview: Story of Seasons: Pioneers Of Olive Town Is Not Quite As Pioneering As We’d Hoped

Random: Nintendo Ironically Celebrates All Mario Switch Games With ﻿Fans, Weeks Before Wiping Some From Existence