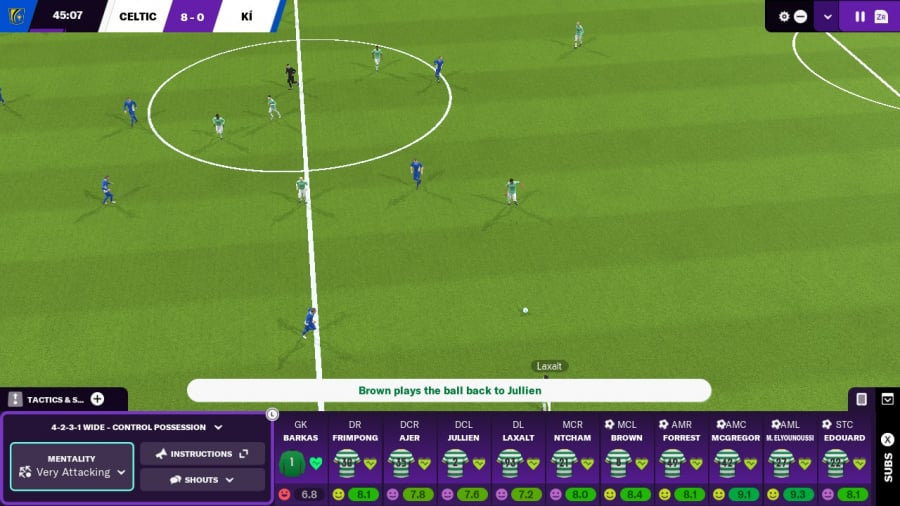 Well, it’s that time of year again. Quite literally, in fact, as it was on this very date last year that we published our Football Manager 2020 Touch review. Here we now have the 2021 edition, and to Sports Interactive’s credit there have at least been some attempts made to mix things up a bit.

Whereas EA’s FIFA series has essentially flatlined on the Switch as fans continue to be let down with frankly insulting ‘Legacy Edition’ releases, the Football Manager games continue to add new features every year: while these are occasionally arbitrary and don’t necessarily mean the game is growing from strength to strength, it’s a welcome move nonetheless.

This year the most notable change takes place during the matches themselves, where the user interface has been completely revamped for the Football Manager 2021 Touch. The game now shows your entire team along the bottom of the screen, where you can see their rating, fitness and the like at a glance. Whenever you feel the need you can tap any player’s icon at the bottom to be shown a series of options, be that subbing them out, changing their tactics or shouting instructions at them.

This quick access to your players aside, the matchday screen also has a number of other new additions. The left side of the screen shows your general match stats, whereas the right side gives you a series of customisable stat pages which you can switch between via a drop-down menu. Meanwhile, in the middle, a new Dugout section lets your assistant coach occasionally give you advice and suggest changes to make on the fly.

There’s also a new ‘Shouts’ feature added to the matchday experience. This lets you yell things to your players from the sidelines, either individually or the whole team in general. Depending on how they’re doing you may want to praise them, berate them, tell them to focus, fire them up or what have you. This in turn should hopefully lead to better results as long as your players react to your shouts positively.

Outside of the matches themselves, there have also been a few other new features added. The most immediately useful of these is the post-match stats: you’re now presented with more statistical information after each game, which includes a new rating called xG (expected goals). This analyses your team’s general performance during the match – focusing mainly on the number of shots you took – and tells you how many goals you probably should have scored based on this performance.

The xG stat is a useful way of telling whether all the hard work your players are putting in on the pitch is actually paying off with a score line that reflects. For example, if you won a match 1-0 but your xG was something like 3.4 (meaning you were expected to score at least three based on your performance), this suggests your players are having problems with the final ball that you’ll need to sort out.

The general layout of the menu system has also been tweaked a bit as Sports Interactive continues to try to improve the user experience, which has always been quite clunky on the Switch. Some related screens are now displayed via a series of tabs along the top of the screen, which makes navigation a bit easier, and various other screens have been given a revamp to try and make things more intelligible.

While the overall sense is that the menus have been improved compared to the previous game, however, it’s safe to say the controls are still the most awkward aspect of playing Football Manager on the Switch. Playing with touch controls is relatively painless, although the sheer amount of detail on the screen means that sometimes it’s hard to tap exactly what you’re trying to hit, and you’ll still be pressing controller buttons on occasion to access certain menus.

Using a controller exclusively, meanwhile, is an exercise in patience and memorisation as you try to learn all the different button combinations used to access different parts of the screen. You can also push in the left stick to bring up a mouse pointer, which works a little better but is also quite clunky and slow to move around. The result is a game that still feels like it’s trying to jam a square peg (a complex football management sim) into a round hole (a games console), even though it’s clear the edges have been given the sandpaper treatment to try and make it fit better.

There’s one glaringly obvious ‘feature’ here that hasn’t been included in the game, but whether that’s a good or bad thing is purely down to personal taste. Despite the game kicking off at the start of the 2020-21 season, there’s no reference whatsoever to the coronavirus pandemic that continues to plague the majority of the world. As such, Football Manager takes place in an alternate reality where the stadiums remain fully packed and teams aren’t affected by sporadic outbreaks of COVID-19.

Sports Interactive head honcho Miles Jacobson has already explained why the game doesn’t include references to COVID and it would be difficult to argue with his logic. Essentially, he considers the game a release for people to help them escape reality, and it would be pretty hard for anyone who may have lost friends or family to the virus to then try to take their mind off things with some Football Manager only to find they had to deal with it there too. On a more game-centric note, it would also have been a bit cheap for players to be doing well in the league only for multiple star players to suddenly come down with the virus.

That said, it could also be argued that this is a game that is almost entirely defined by its attention to detail, and it’s previously included other real-world events that could have a knock-on effect on the running of a club (such as Brexit). It’s fair to say that the pandemic has had an enormous impact on this season, and while we completely understand the team’s reasons for leaving it out, it would have been interesting to have an option to turn it on and face the various consequences it would have had on running your team, be that the unpredictable squad availability or the need to keep the club afloat despite heavily reduced gate receipts.

Again, though, this is entirely down to personal taste, and it would be ridiculous to suggest that the lack of any pandemics in the game means the experience is in any way compromised. Make no mistake, this is still the best football management game in Nintendo history, mainly thanks to the tweaks and improvements that have been made. It still needs to figure out how to make itself more accessible and approachable to newcomers, because its control system is still clunky at best and downright bewildering at worst.

Stick with it though. While those new to the series will undoubtedly struggle for the first season or so while they try to get a handle on where everything is and how to navigate the game’s labyrinthine menus, anyone who persists and eventually learns the ins and outs of how to navigate the thing will ultimately end up with another compelling management sim that should have you playing well into next December. At which point we’ll obviously see you here again for the review of the next edition.

The search for an intuitive control system on the Switch continues, as Football Manager 2021 remains clunky and fiddly to play. Stick with its admittedly awkward controls, however, and you’ll end up with the best handheld football management game ever, thanks to its enhanced matchday options and its improved stats. It’s the Robert Pires of football games: it eventually becomes sensational, you just have to give it a season or so before it properly settles.

Feature: Zelda: Majora’s Mask Is A Testament To What Nintendo Is Capable Of When It Gets Weird