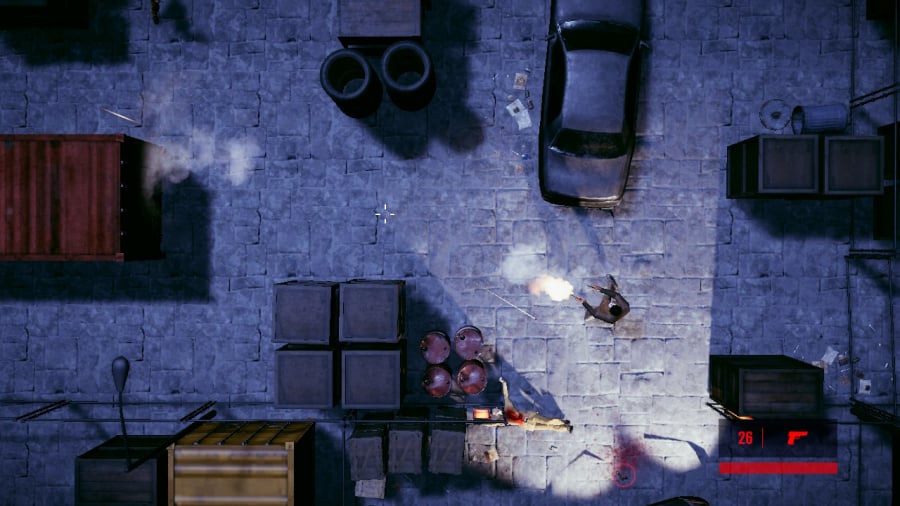 One quick glance at The Hong Kong Massacre, and you’d be forgiven for thinking that Hotline Miami has been given the Legend of Zelda Space World treatment. On face value, the two games are remarkably similar, with the same birds-eye viewpoint and absurdly over-the-top violence right from the start. The Hong Kong Massacre is a wholly different experience, though, favouring a slower, more methodical approach to its bloody violence. It’s also, we’re sad to say, not quite as good as its direct inspiration.

Set across various levels including rain-drenched rooftops and run-down apartment blocks, your goal is to simply wipe out every gun-toting enemy in the vicinity. At the start of the game, you’re kitted out with a pair of handguns, but by progressing through the levels and performing well, you can subsequently unlock a shotgun, an uzi, and a rifle. Each weapon can then be upgraded, boosting their clip size, fire rate, and more. Everything in the game costs stars, which are rewarded for completing specific tasks in each level, like completing it within a certain timeframe or achieving a 100% hit rate.

The gameplay itself feels – at least initially – very similar to Hotline Miami. You move and shoot with basic twin-stick controls, and once you’re out of ammo, you can pick up the weapons of your downed enemies, though sadly there are no melee weapons available. The main draw here is the ability to both slow down time and dodge enemy fire with the shoulder buttons. Trying to get through the levels without slowing down time is almost suicidal, but by combining this mechanic with the ability to dodge enemy fire, the difficulty becomes far more digestible. It also looks pretty cool; like your very own miniature version of The Matrix.

That said, it’s still an incredibly tough game. Dodging works for the most part, but if you get yourself into a situation where two or three enemies are firing at you at the same time, chances are you’ll end up dodging right into the path of another bullet. Unless you manage to dive behind a wall, or a piece of furniture, the odds are constantly stacked against you. To exacerbate this, the enemies are all endowed with sharp senses and pinpoint accuracy, so it’s next to impossible to sneak up on any of them without being spotted.

Graphically, the game is technically decent, though the frame rate could have been bumped up a bit more. From an artistic perspective, the environments and characters are all a bit ‘samey’, blending together from one level to the next, with little variation. It’s a shame, because Hong Kong is undoubtedly a visually striking city, but the buildings showcased in The Hong Kong Massacre could have been plucked from literally any town in the world.

Gallery: Geeks Line’s NES/Famicom Anthology Is The Most Exhaustive Look At The Console Yet

Immortals Fenyx Rising Looks Like It’s Getting A Demo, And It Might Be Coming To The Switch eShop