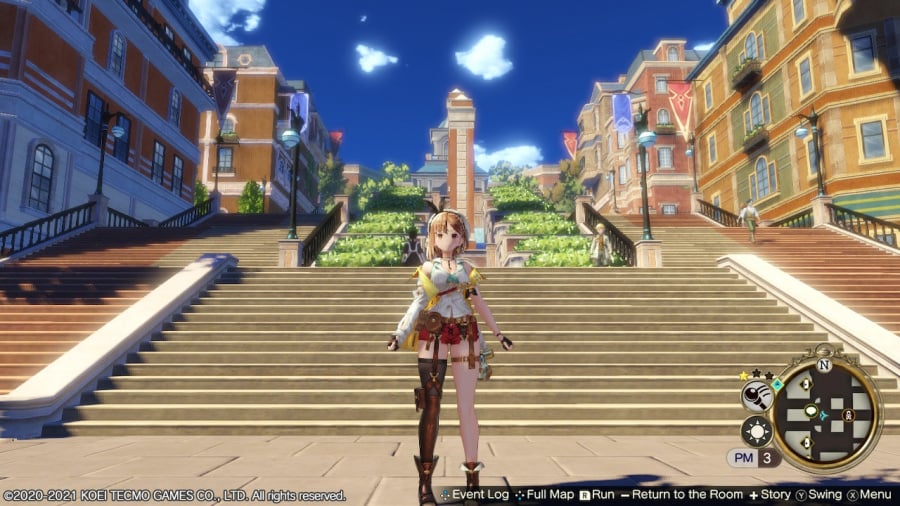 Hot on the heels of 2019’s excellent Atelier Ryza: Ever Darkness and the Secret Hideout, developer Gust has wasted absolutely no time in releasing this second epic adventure for Reisalin “Ryza” Stout, a protagonist who’s proven so popular with fans that she’s the very first since the Atelier series kicked off back in 1997 to get a second crack in a starring role. Far from being any sort of quick cash-in, what we’ve got here is the twenty-second entry in a long-running franchise that elevates combat, dungeon-crawling and the game’s signature alchemy to new heights, while rectifying the previous outing’s somewhat sluggish pace with a campaign that hits the ground running.

Taking place just three years after the events of its predecessor, Atelier Ryza 2: Lost Legends and the Secret Fairy sees Ryza travel from her quiet home on Kurken Island to the bustling city of Asha-Am-Baird where a now grown-up Tao Mongarten requests that she joins him in exploring a series of mysterious alchemy-related ruins. Before leaving for the city, Ryza is gifted a strange glowing rock which promptly reveals itself to be an egg when it hatches a creature known as Fi, who is tied in some strange way to the goings-on at the ancient ruins she must now explore.

In comparison to the glacially-paced opening hours of the last entry in the series, Atelier Ryza 2: Lost Legends and the Secret Fairy gets off to a refreshingly quick start, wasting no time in funnelling players through a handy refresher on combat and alchemical techniques before launching Ryza and the gang into their latest adventure. Of all the games we’ve played in the Atelier franchise so far, this one easily feels as though it strikes the best balance between narrative, combat, exploration and resource gathering through the introduction of a series of excellent ruin dungeons.

Where Atelier Ryza: Ever Darkness and the Secret Hideout could sometimes feel a little plodding and rudderless in the periods of downtime between its main story beats, here Ryza, Tao and new character Patty – as well as a host of returning friends and foes that we won’t dare to spoil here – are kept on their toes and driven forward towards their ultimate goal through these dungeons, which introduce a host of new mechanics and give the game a fun archaeological bent that never grows old over the roughly forty hours it takes to see the campaign through to its conclusion.

Each ruin you investigate here is filled with memories of the people who explored it in the distant past and, by using the new Compass of Recollection mechanic, you and your team must gather clues represented by glowing lights scattered throughout multiple areas in order to piece together puzzles – represented here by fun little stamp books – confront an end-of-dungeon boss and move the narrative forward. Making use of Ryza’s newfound traversal abilities, including hook-shotting her way across gaps with a swanky emerald bracelet, swimming, clambering over small barriers and even riding a beastly mount, the moment-to-moment gameplay is the best the series has ever offered; it’s atmospheric and full of weird and wonderful creatures to battle your way through as you piece together the backstory leading to the game’s central threat which, as per usual, remains a mystery until deep into the narrative’s running time.

Speaking of battles, Atelier Ryza 2: Lost Legends and the Secret Fairy sticks with the massively improved real-time, turn-based combat system introduced to the series in its predecessor whilst making a few tweaks that result in an even more action-packed and strategically satisfying affair. The general flow of fights here remains attack, accrue AP, spend AP on special moves and build up your core charges in order to use items that you’ve synthesised back at your atelier. However, you can now chain together your flashy specials, using as many as your accrued AP allows at one time, as well as expending multiple items in one turn if you’ve banked the required core charges to cover the cost. In practice this means you can, for example, heal yourself and a teammate, fire off an explosive uni and chuck a freeze bomb all in the space of one turn before unleashing a combo of specials that see your teammates – who you’re once again free to control in battle at any time – join in for some screen-shaking attacks of their own.

It’s a combat system that really raised the bar for the series last time out, and here it feels like the handful of clever little tweaks give you even more flexibility with regards to the strategies you employ against foes who are much more satisfying to face off against here from the get-go. Indeed, it wasn’t until quite late in the game in Ryza’s last outing that we came across any sort of proper combat challenge at all, whereas here we were butting heads with highly capable bosses in some of the earliest dungeons. That’s not to say Atelier Ryza has turned into a more hardcore JRPG by any means; this is still a relatively small-scale adventure that’s a relaxing delight to dip into – it’s just that the enemies here provide a smarter challenge that gets you considering your options much earlier on.

With regards to the series’ signature alchemical gameplay, fans will be happy to hear that it remains as deep and addictive as ever, retaining the slick new grid/node-based style of its predecessor while again making a few tweaks and additions that give players even more in the way of choice as they get down to the business of crafting all manner of health potions and defensive/offensive items to carry into battle. Atelier Ryza 2: Lost Legends and the Secret Fairy introduces a new essence system which can be used to change the elemental nature of nodes within recipes as well as adding new traits, making an already hugely flexible synthesis system even more malleable. Gust has also introduced an evolve link system to Ryza’s atelier shenanigans, which allows you to combine two of your created items in order to increase the stats of one, evolving and improving its overall potency – or creating a new item entirely.

Alongside all of this, Ryza now earns SP which can be used to unlock new recipes and buffs on a great big skill tree and, overall, the symbiosis between all of these various elements – the dungeon-exploring, alchemical creation of items, slick battle system and unlocking of new skill tree branches – results in a game that keeps you hooked into its core gameplay loops noticeably more so than any other entry in the series to date. We were so busy with digging around ruins, furthering the mystery-filled main story and getting deep into creating powerful new bombs and potions here that the series’ now almost expected weak points – boring cookie-cutter side missions, lifeless NPCs who repeat the same dialogue ad nauseam and the constant need to gather more and more resources – didn’t seem anywhere near as problematic as they have done in the past.

In terms of performance on Switch, the brand new graphics engine introduced by Gust last time out does a fine job here in both docked and handheld modes, with nothing in the way of framerate issues, bugs or other problems in a big, bright and colourful game that’s graphically on a par with Ryza’s previous adventure with a few new atmospheric flourishes (such as puddles left around town after a rainstorm) thrown in for good measure. Out in the field, Atelier games have never looked or played better, with more variety and scope in the spaces in which you battle and collect resources and – owing to all those new traversal options at your disposal – they’re also far more involving to move in and around. Whether you’re climbing up some vegetation to reach a high point, swimming across a body of water or riding your new mount around areas, what’s here feels like a step up over what’s come before it in the series.

For newcomers who may be considering diving into some Atelier action at this point, Atelier Ryza 2: Lost Legends and the Secret Fairy is definitely an excellent starting point. Yes, you may feel more affinity with the lead protagonist and generally get more out of the host of cameos and returning characters here if you’ve at least played the previous game but, in terms of the story and gameplay mechanics, there’s no real reason to let that stop you joining in the fun. The game’s deepest aspect, its signature alchemical synthesis, can once again be fully automated here if you so choose, removing the biggest barrier for new players, and the story itself works perfectly well as a standalone adventure.

So it’s perfect, then? Not quite. While it’s not quite as annoying as before, the act of gathering resources can still be really annoying, especially when you’re missing one stupidly hard-to-find ingredient. Side quests are also quite boring, which removes a lot of incentive to complete them; these optional missions should add flavour to the story, but more often than not, they’re painfully dull. We’d also like to have seen a more interconnected world, rather than the segmented setup that’s present here – it feels very old-school, and not in a good way. Finally, the lack of English voice acting could be a negative to some players – although we’re aware that the most hardcore of hardcore JPRG fans want the original Japanese voice tracks and nothing else.

Overall then, this latest Atelier adventure is the strongest entry in the series to date and one that happily continues the steady march into a more mainstream form for the franchise that was first signalled in Ryza’s 2019 outing. It’s all still quite quaint compared to other modern JRPG efforts; there’s no free-roaming open world here and the story is still pretty small scale – more interested in friendships and personal learning and growth than some world-ending evil on the horizon – but it’s undoubtedly the most playable and fully-formed Atelier game that Gust has released thus far. If you’re looking for a light-hearted and relaxing JRPG adventure with some slick and strategic combat, addictive alchemy and fun dungeon-crawling action, this one comes highly recommended.

Atelier Ryza 2: Lost Legends and the Secret Fairy takes everything good about Gust’s 2019 Atelier adventure and further refines it, resulting in the best entry in the long-running franchise to date. This may still be a relatively small-scale, old-fashioned JRPG experience, but it’s one that’s full of heart, great characters, slick combat and some excellent new ruin-based dungeons. Anyone looking for a relaxed and enchanting JRPG to sink their time into should definitely check this one out.

How to Clean Your Gaming Controllers Without Damaging Them

Feature: Best Of 2020: 17-BIT’s Jake Kazdal On The Journey From Nintendo Game Counsellor To Making Games In Japan

Feature: Forget Saving Hyrule, Zelda: Ocarina of Time Is All About Fishing For Me