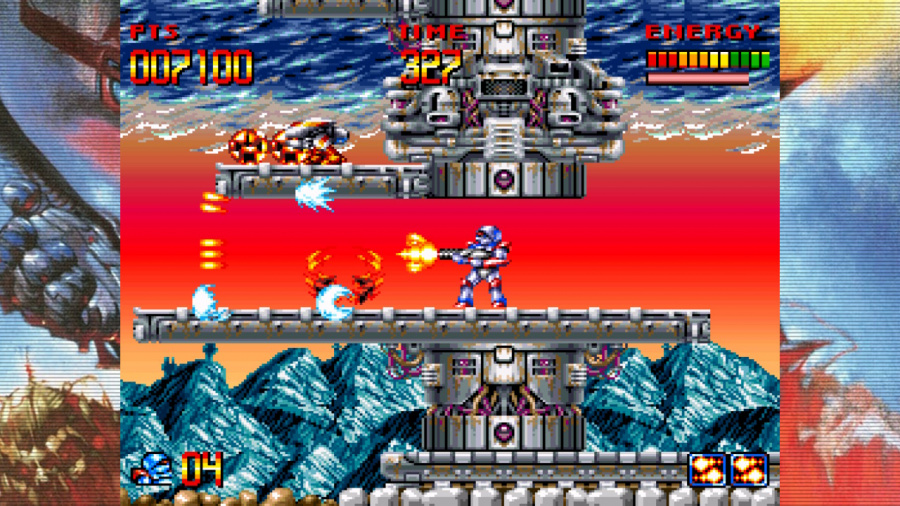 Factor 5’s beloved Amiga platform shooter has been egregiously missing in action for some decades now. At least, the series is back on modern systems in the relatively exhaustive form of the Turrican Anthology 1 and 2, seemingly physical-only collections that bring every notable Turrican to the Nintendo Switch along with some genuinely intriguing Director’s Cut editions of Super and Mega Turrican. Sadly, though, that’s not what we have here. This is Turrican Flashback, a cheaper, smaller digital compilation of just four titles from the series – making for a pretty major oversight.

Super Turrican 2 is tremendous fun and its addition would make Turrican Flashback a much better prospect given that, essentially, the complete series would then be represented. Yes, the Director’s Cuts would be missing but we could live with that if we just had an affordable way to get the base games on the Switch without dropping seventy quid. The omission of Super Turrican 2 is, frankly, inexcusable and a big black mark against this compilation.

Despite this issue, we can’t pretend this isn’t a good buy. One Turrican game is good, but four? A treat of a package. If you’re not familiar with the Turrican series, they’re a set of very, very Amiga-esque run n’ gun-ish blasters, with the speed of Contra but much more of a focus on exploration and secret items. In fact, it’s probably more accurate to compare them to a faster and more difficult Mega Man, as you don’t get the directional aiming of the Contra series.

Though even that’s not entirely true, as in most of the games you have a sort of electric beam you can sweep around to stun enemies, freezing them in place. You can also curl into a spikey ball not entirely unlike Sonic the Hedgehog or Samus in Metroid and roll about all over the shop dropping landmines. It defies conventional genre descriptors in some ways, but it’s all very familiar and you’ll find it second nature in no time.

The four games offered here aren’t especially different outside of their level designs, but that’s no bad thing. Level design is of consistently high quality, but some gamers will struggle with the open-plan feel of the locations – this is a European platformer with much of what comes with that, meaning a lot of floating platforms, invisible blocks holding myriad secret items, and a whole lot of what can seem like empty space.

The pace of the game is faster and the controls are uniformly tighter than you’d expect, but some gamers bounce hard off what we’ve seen termed “aeroplane hangar” levels and if you’re one of those people you’re unlikely to get a lot out of any Turrican game. Well, except Super Turrican 2, which is a much more linear and focused experience that drew more inspiration from the likes of the aforementioned Contra, but (as we’ve mentioned already) is bafflingly not included here. Still, for the open-minded gamer (or existing fan) this is four solid games of great stuff; visually striking and distinctive levels with that lovely Turrican labyrinth-iness and tremendous ‘Original Chip Set’ soundtrack.

As a compilation, Turrican Flashback is pretty slick and well put together, but lacks any real extras. There’s no art gallery, for example, but you do get the usual save states and even a rewind feature for those who fear commitment. There’s also the usual underwhelming screen filters that nobody in their right mind would ever use, but we suppose it’s nice to have the option, and there are a fair number of them to ignore. The most important thing is that it’s quick to start, quick to load and quick to switch games. The interface never gets in the way of your Turrican experience, so the collection serves its purpose perfectly adequately.

It’s rare to see Amiga games surfacing at all, so it’s a real treat to have two of the very best available on Switch, along with entirely enjoyable Mega Drive and SNES efforts. We know we’ve harped on this, but it really is a baffling shame that Super Turrican 2 was left off the set, given that it’s still a joyous and impressive experience and that its inclusion would have made this compilation basically complete. As it is, though, Turrican Flashback is still a lot of fun with plenty of gameplay to offer, and a nice window into a type of game you rarely see anymore. Except in Gunlord X, we suppose.