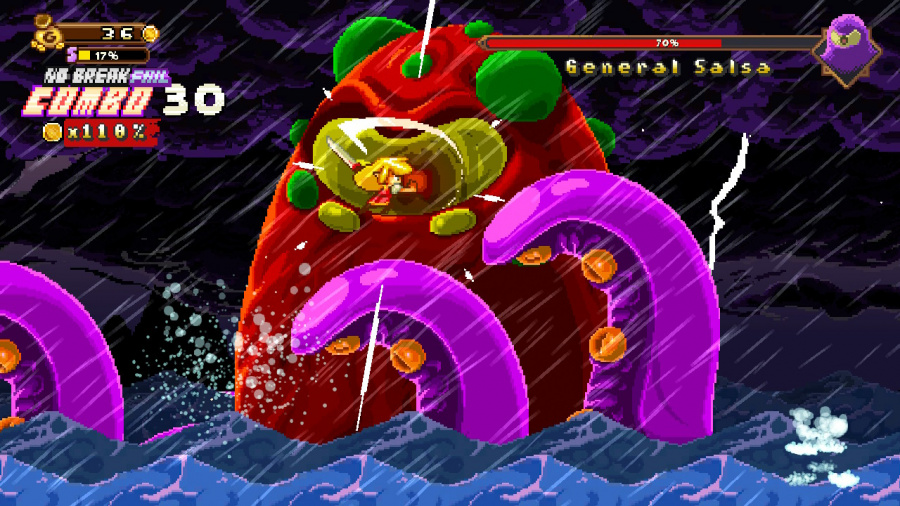 The initial vibe we picked up from side-scroller Golden Force was a very positive one. The mixture of platforming and combat – complete with power moves, juggles and burst-dashes – recalled Treasure’s GBA masterpiece Astro Boy: The Omega Factor. It may not be the most well-known game, but trust us when we say this: anything that can capture its essence – even momentarily – has something worthwhile to offer. While it can’t justify this comparison for its duration, to even mention it in the same breath as Astro Boy speaks to the effort that’s been poured into Golden Force.

Taking control of one of four characters – or two of four in local multiplayer – it’s a fairly straightforward action-platformer in concept, but the execution is a cut above average in several ways. Movement and combat feel good and crunchy (though there’s a lack of HD rumble), with enemies able to be juggled into the air and launched away, turning them into dangerous, ricocheting projectiles that can damage other bad guys.

When defeated, they explode into gobs of gooey red blood and a fountain of coins – this is a ceaselessly satisfying bit of visual feedback and can be rather spectacular. This same level of impact is retained in almost every action, such as bashing seven shades of something-or-other out of a treasure chest, watching coins spew out of it into your waiting wallet. Golden Force generally understands that pronounced visual feedback is important to action games. It’s a shame, then, that when it lapses from this understanding it does so in rather devastating ways.

In a game that’s eager to kill you, it’s always best practice to make every one of those deaths feel fair. Golden Force, sadly, doesn’t. Your attacks are limited in their range; that’s fine, it’s melee combat. But what makes this problematic is the fact that simply touching enemies will reduce your health. Sure, that’s standard in platformers, but not when you need to get quite as up close and personal as you do here.

It’s all too easy to overshoot on a combo, brush against the enemy, and take damage. If you had a more reliable means of health recovery, this would be easily forgivable, but HP refills and checkpoints are surprisingly rare. Monsters will drop from the sky as well as burrowing up from below, another cause of frustration. These problems could have been mitigated by simply making enemies not damage the player on basic contact, or even adjusting the way health works so the weakest beastie doesn’t shave off the same amount of health as the hulking, tentacled monstrosity.

Besides fighting, there’s also platforming to be done and by and large, it’s fun stuff. Levels are about the right length (though could use another checkpoint apiece, as mentioned), and you traverse them breezily and snappily. Your character’s ranged dash-attack move is a good example of a combat mechanic that enhances traversal, and the large, special coins hidden within each level (trade these in for pricey permanent upgrades) are well-placed.

Disappointingly, there are some rookie-level design mistakes that bring things down. We were shocked to find one such example in the early game a section where a line of coins trailing downward off-screen led to an instant-death pit. The situation requires the player to drop, then dash forward onto a platform only visible once you’ve already left safe ground. Sure, it’s only going to catch you out once, but it’s such a cardinal level design sin that we fear it may betray a lack of testing. Of course, that’s just an assumption, as there is an evident passion for games here, but this sort of thing really has no place in an otherwise solid platformer. Add this sort of thing to the off-screen turrets and already-lamented burrowing enemies, and there’s enough frustration to push you away from the game if you don’t have patience.

Visually, it’s all pleasant enough, with a fun (if familiar) pixel-art style that’s appealing and coherent. There are some atrocious frame-rate drops when the screen gets too busy, but thankfully a patch has been promised and even then we didn’t find they led to any unfair deaths, mostly only cropping up when enemies are destroyed and no longer a threat. The music is suitably rambunctious, though we found it doesn’t stand out. Aesthetically the game is more function over form, and with the exceptions of the sadly quite major issues we’ve already mentioned, this is a good time.

It’s disappointing that Golden Force falls down in the areas that it does, because without these fixable issues it would be an easy recommendation – level design is mostly strong, the boss battles marry spectacle with varied and fun-to-learn attack strings nicely, and it feels good to get stronger and play better. Unfortunately, some rookie errors come close to spoiling the fun altogether, but if you’re bloody-minded enough to muscle through these frustrations there is undoubtedly a lot to appreciate about Golden Force. Which is a shame, in a sense, because “Golden Farce” would have been a perfect tagline for this review. The one we’ve had to opt for is rubbish, by comparison. (It’s not as easy as you might think, this game-reviewing lark.)

Random: Hacker Creates The Game Boy Tetris Of Your Dreams

Soapbox: It’s Time To Normalise Giving Up On Games Early