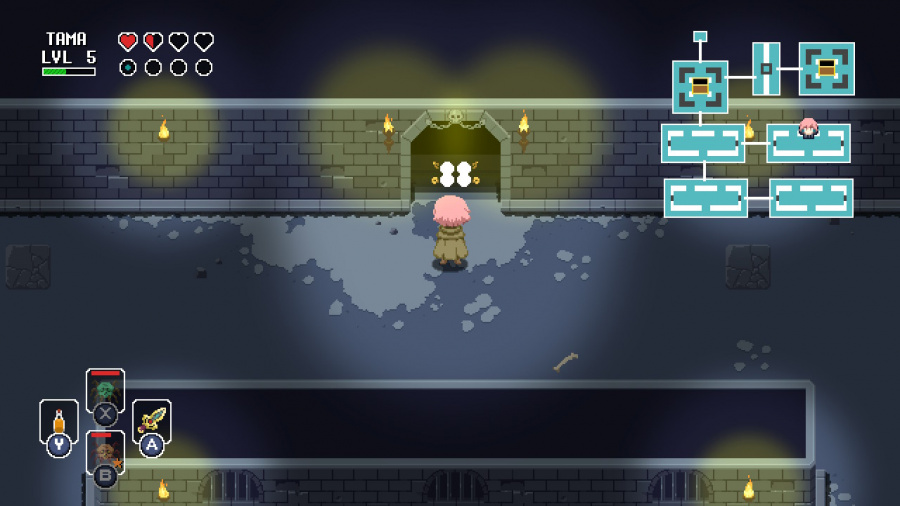 A sword that can raise the dead? That’s the opposite of what they usually do! Gosh, if only we had something like that, we could resurrect all our enemies so we can enjoy destroying them again. But we digress. The titular Sword of the Necromancer and its ability to is the hook upon which this game enacts its otherwise familiar dungeon-crawling roguelike gameplay. Unfortunately, it’s a mechanic which is so underutilised that it may as well not even be there.

The story and presentation are the best part of the game. Proceedings begin with a genuinely brilliant animated opening that rather belies the appearance and feel of the game proper. The princess Koko has sadly carked it and it’s up to your player character, Tama, to use the Sword of the Necromancer and raise her from the dead. To quote the most beloved mascot in gaming history, what could possibly go wrong? Famously, raising the dead always tends to pass without incident, right?

What this amounts to is a roguelike dungeon crawl with so little focus it’s almost embarrassing. That’s really not to undermine the no-doubt hard work and passion of the developers, but there’s just nothing whatsoever to get your teeth into in Sword of the Necromancer. It’s hamstrung by one major and completely insane design flaw; you can only carry four items. This would maybe, maybe be OK, but the central mechanic of the game – resurrected monsters that fight on your side – take up a slot each.

We’ll come back to this nonsense shortly, but an explanation is in order. General combat sees you slashing at your enemies ala Zelda, but upon defeat, it’s possible to reanimate their corpses in order to fight alongside you. Resurrected enemies level up as they fight, but they’re easily killed. We’d say it’s best not to get attached to them, but you won’t really need them anyway as their A.I is rubbish and they couldn’t hit the side of a barn – a major problem given that the third boss is the side of a barn.

Okay, obviously that’s untrue, but we’re trying to inject some entertainment value into this review of a game that it’s shockingly difficult to write anything interesting about. You’ve seen all of it before, and done much better. It has the ostensible structure of Enter the Gungeon, but with none of the gameplay variation that makes that title so compelling. Kill enemies, get a key, fight a boss, go to the next floor. Between floors, you’re able to send items back to the “hub” area to use, abuse and upgrade for your next attempt, but there’s very little more to it than that. You’ve got a fun, speedy dash move to help you get in and out of enemy range, but it’s very limited and on a cool-down, so you can’t even zip about the dungeon when you’ve cleared it out. That’s such a basic thing and would have made the game far breezier and more fun.

It wouldn’t be enough to save it, sadly. We could reel off a laundry list of complaints. The aforementioned item limit essentially means that the item synergies and gameplay diversity that literally define this genre are conspicuously absent. Summoned monsters taking up a slot and being basically useless – even with gradually-accrued upgrades – essentially writes off any reason to engage with Sword of the Necromancer’s primary selling point. You can kill the normal enemies and bosses very easily with your sword, as long as you’re patient. Which begs the question – why even attach a roguelike structure? It’s buggy, too. The second boss got stuck in a wall, unable to attack us while we spammed the A button and gradually whittled down its health with absolutely no resistance.

We could give some of this a marginal pass if there were some pretty aesthetics or interesting environments, but barring some palette changes every floor looks more or less exactly the same, with character and enemy sprites that are just about acceptable. It’s all so uninspiring and that’s a terrific shame, because as we mentioned, the storyline is pretty interesting. You’ll find lore documents scattered around, and well-drawn (though strangely low-res) cutscenes with warm, heartfelt voice acting enrich the proceedings.

We only wish they were in service of a far, far superior game. It’s so barren that we were absolutely convinced that we must have missed something. So we dug, and dug, and dug… and turned up empty.

With nothing to offer besides some pleasant storytelling, we cannot recommend Sword of the Necromancer on any meaningful level. It’s not horrible, but it’s bereft of both meaningful content and any manner of unique execution. A sequel or heavily-modified relaunch could salvage the game into something much stronger, as the core idea of resurrecting fallen monsters is a decent one, but its treatment here renders it irrelevant. What a shame. This could have been something special. It’s not a complete and total disaster – occasionally, when the screen is a little busier, you might feel a flicker of engagement as you dash between combatants – but overall, we’ll be leaving this one for dead.

What Are Your Most-Played Switch Games This Year? Find Out With Nintendo’s Year In Review