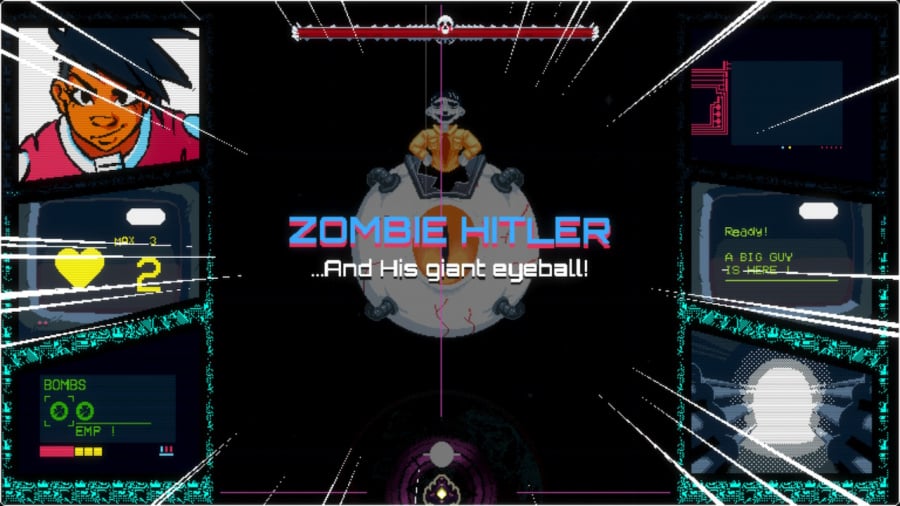 Just as we tend to approach games that try to hammer the shoot-em-up into a new mould with an air of caution, Project Starship X, in fact, starts with a caution. And it’s necessary.

We fired it up in a dark room and, ten seconds into the first stage, just as hell broke loose, the cat sat on the TV remote. The volume went so stratospheric it could be heard on Mars, while the equivalent of a jungle warfare ambush – a military-grade barrage of light and sound – exploded from the screen and turned the living room into the equivalent of a ’90s neon rave. Keith Flint would have loved it, but the cat went halfway up the curtain and it took five minutes for the ceiling lampshade to stop swinging. What a start!

But we digress. Project Starship X is a total overhaul of 2018’s Project Starship, with vastly improved graphics, mechanics, and a much cleaner spacial layout. The music features several catchy ditties that are a tad similar, but well suited to the game’s tone.

You will likely have seen it referred to in games media as a “bullet hell shmup”, which it certainly isn’t. While bosses occasionally spit patterns at you that ape Japan’s curtain-fire style, it generally follows a totally different set of principles. That said, while it isn’t bullet hell per se, it’s certainly “hell” of another kind.

A procedurally-generated roguelite, Project Starship X is actually well-measured in terms of random elements. The difficulty curve is definitely uneven, with bosses being too easy compared to the antics of the actual stages, but you do tend to encounter similar hurdles at the same points in each run. Despite its rapid mix of incoming enemies, obstacles, craft changes, secret bosses, alternate routes and magnetic objects, it’s still very learnable.

A bit like a pinball machine in space where you’re the ball, everything closes in and fires on you relentlessly, with scenarios switching at approximately the same speed as your pants need changing. Cleverly, enemy formations are foreshadowed by flashing warning signs to give you an idea of where you need to be positionally and urgently. ‘Mad Event’ scenarios will suddenly break the action for a variety of ten-second reflex tests that often force you to quickly navigate into tiny safe areas of the screen or ram through enemies.

The simplicity of the mechanics is one of the game’s key advantages. Tapping fire keeps your ship moving at normal speed, while holding the button down creates a concentrated, stronger laser that slows your mobility. The ship’s dash function is the game’s pivotal mechanic, allowing you to pip forward to pass through bullets and barricades, and snatch roaming power-ups. The dash period offers precious invincibility, but has a one-second cool-down window before it can be used again, encouraging precision.

There are four initial characters to choose from, each with pros and cons. These include an all-rounder; a speedy but weaker female pilot; a stronger but slow musclehead; and a second female character, Sophie, who has a totally randomised set of stats on each restart, meaning she can either luck out with five shields and max strength or end up incredibly feeble. There’s also a secret unlockable character who wields incredible firepower at the detriment of a single shield.

The game’s sense of humour is like the Jetsons meets Ren & Stimpy meets Jeff Minter. There are almost as many aimless Nazi references in here as your average Twitter debate, and we’re still not sure if the “Shi**y Fire” power-up is named so because of the way it looks or the way it performs. The humour extends to game’s structure, too, having you bat down pins in a spot of intergalactic bowling, face-off against a Pac-Man ghost around a mini-maze, and at one point drop a boss, Bowser-style, by jumping on a switch behind him.

Project Starship X is undoubtedly well engineered. It offers no continues and scant few bombs, but regularly gives you a chance to replenish your shield stock, either via scattered pickups or at a brief shop interlude where you can spend coins gathered from destroyed enemies. Although when you first start playing it seems unfair, it’s actually fairly quick and easy to finish once you hone your reflexes. You only ever play five stages in total from an increasing pool of possibilities that are introduced through extended play. There are also four different last bosses to encounter depending on how your run pans out, and multiple endings. If you push the game to its limits, there’s a range of hardcore modes that will then push you to yours.

Although you can beat its five stages fairly quickly, it’s a game that never really finishes, as it’s continually developing and expanding. When you get through the fifth stage you’re presented with a warning of things to come, and then start over with a host of new stuff thrown in – including new enemies, bosses, procedural mix-ups, Mad Events, and unlockables. Some of these include new weaponry and devices, and things like the Tank Module are interesting, allowing you to dash inside for cover and make use of its increased firepower.

There are a few niggles in the fabric of Project Starship X’s makeup. The ship can only dash directly forward and diagonally left and right at thirty-degree angles – it can’t dash backwards. This always leaves you fighting to get back down the screen. It’s a strange omission not to allow greater dash movement, especially when you’re stuck up-screen in the fray. There are times when you have little opportunity to regain a safe position before an attack overlap occurs and you end up heading straight into an obstacle.

Also, while it makes sense that the developer has crammed the game with enough ideas that it’s continually interesting to play, the sudden gravity effects that briefly attract your ship to the nearby sun or force you back down the screen really have no good place in anything resembling a shoot-em-up, and should have been left on the cutting room floor.

Additionally, while most shmup based games are all about scoring – and this is no exception – the random nature of it does beg the question of whether you’re going to get the same scoring opportunities in a stage as everyone else on the leaderboards. Keeping the score multiplier up and finishing a stage without losing shields is paramount (and tough as hell) and the end of stage wrap up will tell you to ‘Git Gud’ until you can make it through more or less unharmed. As with any good arcade-style game, scoring is intertwined with a certain amount of risk, and Starship Project X definitely has this down, offering big bonuses for engaging in its hardcore modes or pulling off outrageous feats like finishing the game with the Tank Module intact.

Despite its unconventional structure, Starship Project X is an undeniably creative endeavour. It’s clear that the developer has enjoyed making it, and it manages, against all odds, to do something new and interesting with the often tired shoot-em-up premise. Once you learn its catalogue of obstacles and sync with its immediacy, it gets a lot more manageable and enjoyable, and trying to finish stages unscathed is a fun pursuit. Unfortunately, no matter how skilled you become, the experience is occasionally marred by unexpected attack overlaps and ensuing ship positioning struggles. While the balance isn’t perfect, and its longevity in terms of holding your attention is questionable, it deserves applause for its originality and its short, fun, adrenaline-fuelled nature: the kind arcade gaming was designed for.

How to Clean Your Gaming Controllers Without Damaging Them

Review: Space Invaders Forever – One Great Game Does Not A Great Package Make