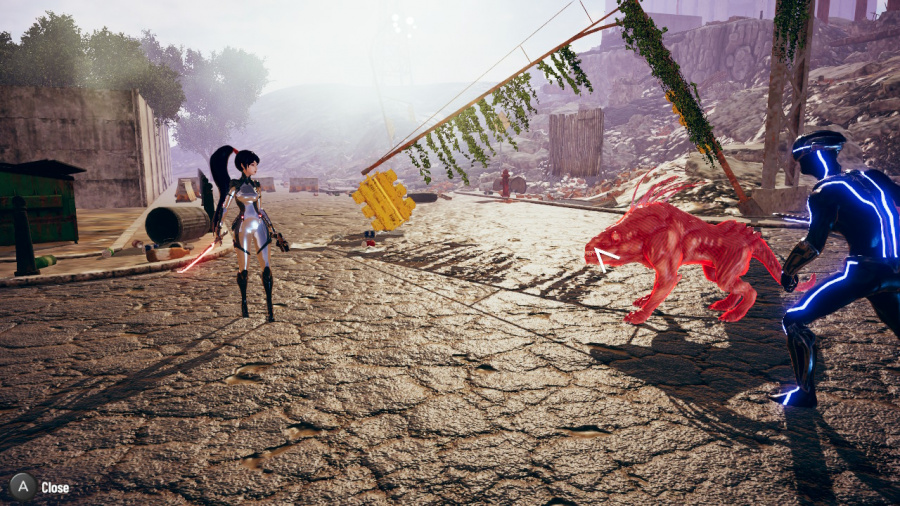 We think it’s fair to say that modern gamers aren’t known to be the most patient of audiences. When we want gratification, we want it now. It’s 2021, we don’t want instruction manuals (unless they’re part of some boutique physical release, of course), we just want to get into the game. Neoverse Trinity Edition achieves quite the paradox; it’s both quick-go accessible and incomprehensible at the same time.

Neoverse is a card battle game with no story. Or, at least, none that made itself particularly apparent. You choose a character (two initially, with a third unlockable), each having a selection of preset decks that each favour a particular playstyle and set of mechanics – aggressive shooter, blood-draining vampire, etc, etc. Then you’re straight in at the deep end. While the basic play controls are explained – sort of – the actual rules of the game will, by and large, need to be puzzled out by yourself.

It’s nice that the core game isn’t super complex, but a compact little tutorial would have gone a long way to ease the player into Neoverse Trinity Edition. As it stands, there’s a bit of a barrier to entry; why is any of this happening? Who are these people? What do these numbers mean? What are these currencies for? A combo bar? What combo? What does “Punishment” mean in this context? How does Radioactivity affect your plays? Even now, we’re not sure of the answer to all of these questions.

That doesn’t mean we didn’t have fun with Neoverse Trinity Edition, though. While it’s just a series of card battles, they play out like a turn-based RPG. You’ll have five cards drawn across the bottom of the screen. Pick your card, and if you can afford it, you’ll play the thing. You’ll need to balance attacks with defensive moves as you work your way through to each boss battle, because your health doesn’t automatically regenerate between fights. Thankfully, you’re able to use the cash and skill points you’ll gain through winning “matches” and achieving different goals to upgrade your abilities as well as buy and upgrade cards for your deck. You can also get single-use items that don’t cost anything to use but can turn the tide of a sticky situation quite effectively – healing your HP, or unleashing a single powerful attack, for example.

It’s pretty compelling as you figure out how your deck works, how you interact with the enemies and how to mitigate the nuisance cards they’ll foist on your hand. Clarity, however, is something of an issue. This writer is fully prepared to hold his hands up in deference to his own stupidity, but shuffling the deck – a request the game repeatedly made of us – remained an absolute mystery, despite inspecting every command on the screen. Additionally, the UI feels extremely small and bitty in handheld mode – the text is minuscule and, while readable, it’s far from ideal.

In fact, we’d say that graphically, we fear that Neoverse Trinity Edition leaves quite a lot to be desired. The visual style is generic and cheap-looking, with animations that fail to spark interest and a litany of performance issues like hitching and slowdown – just moving both analogue sticks at once causes the game to violently soil itself in an attack to multitask, which is technically atrocious.

We also found a few decisions rather confusing or irritating – why do you have to collect your post-win rewards individually? Why even have the option to skip them? Maybe we’re just rubbish, but we can’t imagine getting particularly far without buying more items and cards. That said, while Neoverse can be surprisingly tough, it’s a very fair game, and it’s always apparent what’s going to happen in the next turn, allowing for a fairly deep level of strategic planning if the game clicks with you. It’s just a shame that it sometimes feels like it’s doing its level best not to.

There’s plenty of replay value here with the unlockable gear, extra decks, fanservice-laden costumes and the randomised nature of the gameplay naturally extending your playtime. The many variables and status effects should keep you on your toes, along with the way a battle can suddenly flip on its head with monsters able to summon or buff their fellow scallywags.

Neoverse Trinity Edition succeeds at being an enjoyable deck builder, but it does so in a way that’s seemingly desperate to highlight its limitations. It runs embarrassingly poorly at times, and does almost nothing to ingratiate the player to its many systems, all of which must be puzzled out more or less from scratch. While this is far from ideal, it’s not enough to totally kill the game’s appeal. Robust strategy is both possible and necessary in order to progress much beyond even the second boss. If you vibe with Neoverse Trinity Edition, it’ll last you a while. It’s just very, very difficult to get to grips with this bizarre, confusing game.

Soapbox: When Is The Next ‘Big’ Nintendo Direct? Oh, Does It Really Matter Anymore?

Here’s Why The Cover To F-Zero Is So Special

Poll: Bravely Default II Is Out Today On Switch, Are You Getting It?

Anniversary: Can You Believe It? The Nintendo 3DS Is Now 10 Years Old