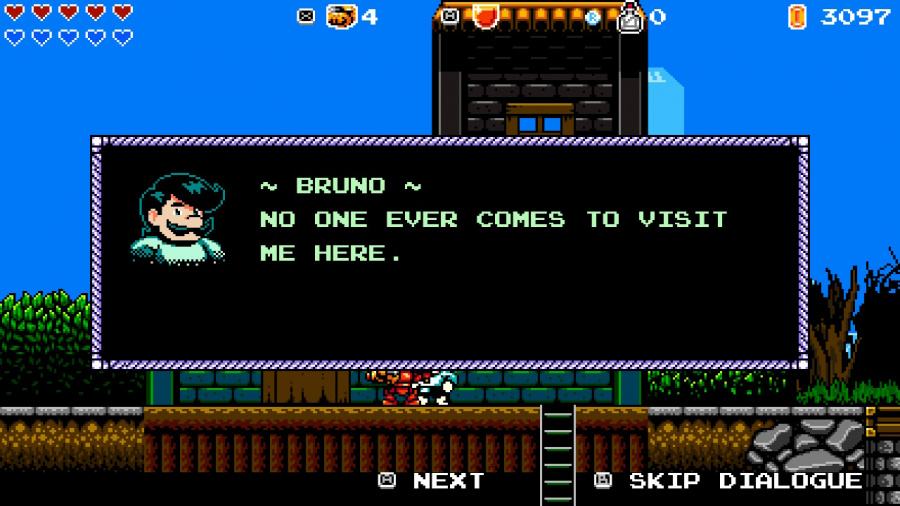 About seven years ago, a Swedish developer named Eric Lavesson set out to build his own game engine, not knowing entirely where it might lead. As time passed and prototypes were made, a retro-style project began to coalesce which demanded more of his time and attention. That project was Cathedral, a new 8-bit style Metroidvania which acts as the inaugural debut of Decemberborn Interactive. Though it does little to set itself apart from the pack, Cathedral nonetheless demonstrates the developers’ strong understanding of this beloved era of gaming and stands as an enjoyable experience on its own.

Cathedral starts out pretty light on story, placing you in the shoes of a mute knight in red armour who awakens in a mysterious cathedral. After poking around a little bit (and suffering a boss fight or two) an impish little ghost shows you a door in the heart of the cathedral with five little notches in it. The ghost has a gem which fits into one of the notches, and your quest from then on mostly revolves around exploring the cathedral and surrounding lands in search of the remaining gems and hopefully the secrets of your past.

Cathedral is a Metroidvania release through and through, so the extent of your experience is spent fumbling from one area on the large world map to the next, picking up lots of collectables and upgrades, and backtracking to previous areas in search of new paths and secrets. It’s a formula that you’ve seen done thousands of times before, and to be entirely fair, it doesn’t really add much to it. That said, the mixture of difficulty, interesting level design, and the quick pacing ensure that Cathedral remains an enjoyable experience throughout.

One of the driving reasons for what keeps the adventure so thrilling is the relatively hands-free way that the player is treated. You’re given some good suggestions of where you should go next, but objectives are rarely spelt out for you, which ensures that the journey is player-led and dependent on where your whims take you. For example, we encountered one semi-secret area early in our journey that obviously is geared more towards your knight after a few upgrades have been acquired. We couldn’t explore all of it and died to several one-hit kills, but persistence rewarded us with a helpful upgrade that we probably weren’t ‘supposed’ to get until much later in the journey.

Regardless of what path you find yourself taking, the varied level design is sure to test your dexterity and keeps mixing things up to keep obstacles from getting too stale. One early upgrade, for example, is found at the bottom of an unusually tall and somewhat easily-traversed chamber. After collecting the upgrade, lava begins to rise from the floor, and you’re then tasked with running that same chamber in reverse as you desperately try to escape your impending doom. New environments are also keen to bring in new level gimmicks, which help to give each area its own sense of identity as you’re tasked with slightly altering your playstyle to match the fresh obstacles.

The difficulty remains rather stiff, too, not quite reaching Hollow Knight levels, but nonetheless ensuring that you’ll have to take a few attempts before properly mastering a boss or challenging set piece. Luckily, death is handled here in a way that keeps you on edge and makes each failure feel a little more impactful than simply restarting a checkpoint. Upon losing your life, your knight gets sent back to the last checkpoint and loses ten percent of his gold. In addition to this, you can potentially find yourself starting at half your max health, too, as there’s a sage back in town who can (for a fee, of course) double your health for the duration of that life.

While you’re in town, you can also spend your gold on helpful upgrades and consumables to give you an edge in the tougher parts of the map. The most helpful of these upgrades – such as an improvement to how much gold you retain on death – don’t come cheap either, which gives every death that extra bit of sting and conversely gives a nice sense of accomplishment when you’ve finally managed to hold onto enough loot to make that expensive buy.

The most interesting and useful upgrades always come from killing bosses and exploring obscure corners of the map, and these offer up a mixture of standard upgrades, like a dash manoeuvre, to something like a magnet for puzzle-solving. There are countless opportunities to step off the beaten path to find more of these, and if you happen to not be properly geared for a room, you can always leave a note of it on the map to come back to later. It’s little features like this map-marking function or the simple fast travel system that help to cut down on the grind of backtracking and make movement feel more purposeful overall.

It should take you anywhere from fifteen to twenty hours to see Cathedral through to its end, and all of this is backed up by some decent (but not spectacular) presentation. The visuals adhere well to the NES-style limitations, while there are some liberties taken to improve the experience, such as the extra smooth animations for most sprites. Still, little features like most bosses having an all-black background are a nice touch and go a long way towards selling the old-school aesthetic, even if it feels a rather played-out by this point.

If anything, that point really acts as the greatest criticism of Cathedral: it feels played out. The eShop is positively swamped with Metroidvanias and 8-bit style platformers by this point, and Cathedral has a hard time escaping the long shadow those other releases cast. All the key elements of a good, engaging action-platformer are here, but nothing especially stands out as being exceptional or otherwise above the bar. That being said, this is very much the equivalent of video game comfort food, and those with a deep affinity for this kind of game will doubtless glean plenty of enjoyment from it; just don’t come into Cathedral expecting to be blown away.

Cathedral is a well-made and enjoyable action-platformer that’s sure to please fans of the genre, as it showcases lots of strong level design, tough difficulty, and plenty of rewarding secrets. Even so, there’s a sense that something is missing here to take the experience a step higher, as it’s the epitome of ‘just’ another entry in an already crowded genre. All the same, we’d give Cathedral a recommendation to anybody who enjoyed Shovel Knight (or its many imitators) and is looking for something to hit that same appeal. Cathedral very likely won’t be your favourite action-platformer, but it’s got more than enough going for it to be worth your time and money.

Markarth, In-game Events, and More Close Out a Year of Adventure in Elder Scrolls Online

Cloud Save Support Is Now Available In Minecraft Dungeons