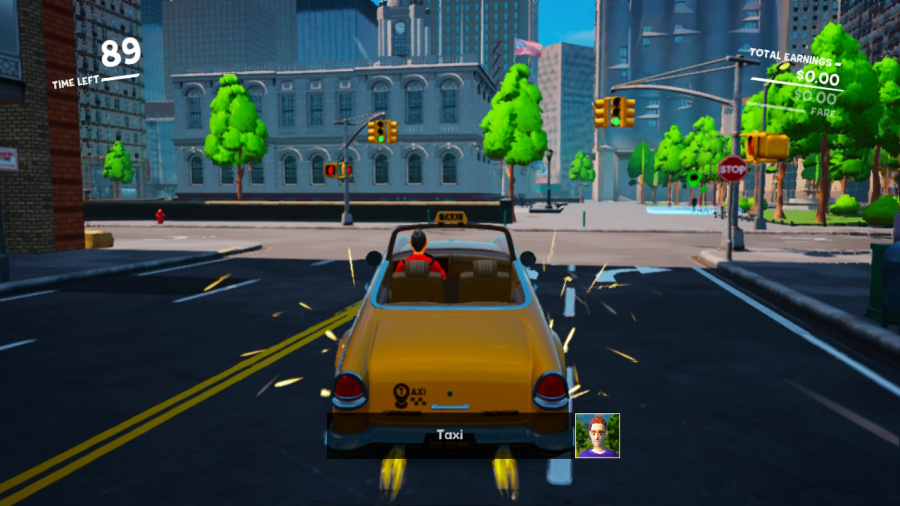 It’s been a minute since we last got a proper, honest-to-God taxi driving game. Putting aside a couple of questionable mobile spin-offs, Sega’s own Crazy Taxi series has remained dormant for more than a decade. Since then, of course, even the word ‘taxi’ has largely been relegated from the English language for the far less fashionable ‘Uber’ (though we’re fairly confident there will never be a ‘Crazy Uber’ game). The world is a much different place than it was back when Crazy Taxi launched, and the genre has, by and large, gone the way of the Dodo.

Thankfully, Taxi Chaos is somewhat of a ‘spiritual successor’ to the Crazy Taxi franchise. It’s an admirable modern take on the genre, proving that games like this still have a place in 2021 – although we’re disappointed to report that its overall appeal is diminished by flawed gameplay, lack of longevity, and a few annoying glitches.

The premise will be instantly familiar to fans of the Crazy Taxi franchise: taking place within the open-world of New Yellow City (which is basically a condensed, cartoon version of New York City), you play as one of two characters – Vinny and Cleo – and you must pick up your clientele and drop them off at their destination in the quickest time possible. The quicker you drive and the more risks you take along the way, the more money you’ll be rewarded from each passenger. Your total fare amount is then tallied at the end of the timed session and displayed via an online leaderboard in the main menu.

New Yellow City itself is surprisingly well-realised. The streets feel dense with buildings, trees, and signposts. Much like the real New York, there’s a large park complete with a pond, and instantly-recognisable locations and landmarks like Times Square and the Chrysler Building. The amount of pedestrians and cars on the road is a bit disappointing, and the city feels a bit dead as a result, but we’ve been assured by the developer that this will be increased in a future patch.

If you’ve ever been to New York, then you’ll know that the road layout is rather like a grid pattern. This is replicated in Taxi Chaos, and as a result, there’s an overall lack of variety or verticality to the world; don’t expect any steep slopes or curving roads like you might see in the original Crazy Taxi or The Simpsons Road Rage. Additionally, the overall space is a bit smaller than you might expect, and although the game encourages you to jump and use ramps to reach new heights, these opportunities are few and far between; it’s a shame, because when you do manage to hop up onto a rooftop, it’s exhilarating and really cuts down on your time.

There are three main modes for you to try out in Taxi Chaos. The mode you’ll likely spend the most time in is Arcade; this is the standard timed challenge in which you drop off customers to earn money, with a handy pointer letting you know which direction to go. Pro Mode is very much the same kind of deal, except there’s no pointer to help you out, so you’ll need to know the layout of the map like the back of your hand to succeed here. The final mode is Free Roam, where you’re free to drive the streets of New Yellow City without the constraints of a time limit; this is great for learning where certain destinations are located, and can then be applied to both Arcade and Pro Mode.

How long Taxi Chaos lasts is largely dependent on how willing you are to climb the online leaderboard. Although we’ve been told that the unlocking process is being tweaked in a patch, there are only seven car models to unlock, and it doesn’t take long to get them all. In addition to the normal taxi rides, there are also hidden items dotted around the city, though there’s little incentive to collect everything. There’s an in-game achievement list that is reasonably extensive, though again, you’ll likely unlock the majority of them just through normal play without realising it.

Graphically, the game looks decent enough, and runs at a smooth, stable pace for the majority of the time (there were just a couple of occasions where our taxi crashed into a building and got stuck, forcing us to restart). With a few more cars and pedestrians in the upcoming patch, we’re sure the city will look and feel much livelier than at present, but nevertheless, there’s a distinct ‘generic’ feel to the visuals that we can’t quite shake. It’s lacking its own voice, and as a result, looks and feels like a lot of ‘cut and paste’ mobile games. The soundtrack, unfortunately, doesn’t fare much better; we’re told more upbeat rock songs will be included at a later date (though don’t expect to see anything from The Offspring), but the music available now is quite simply underwhelming, and fails to inject the experience with some much-needed adrenaline.

Taxi Chaos feels very much like a proof of concept; it’s certainly evidence that a taxi game has its place in 2021, though it’s lacking that vital spark that would truly make it a must-play title. The city itself is well-made, with plenty of sights to behold, but the overall visual design feels a bit generic and lacks its own voice. There are few incentives to play for extended periods of time, so how long the game lasts is largely dependent on your own willingness to climb the online leaderboard. Nevertheless, Taxi Chaos is an admirable revival of a genre that’s been dormant for far too long, and a good foundation for a potential sequel down the line.

Sakuna: Of Rice and Ruin Gets Another Minor Patch

Memory Pak: Taking My First Starter Pokémon All The Way To The Elite Four