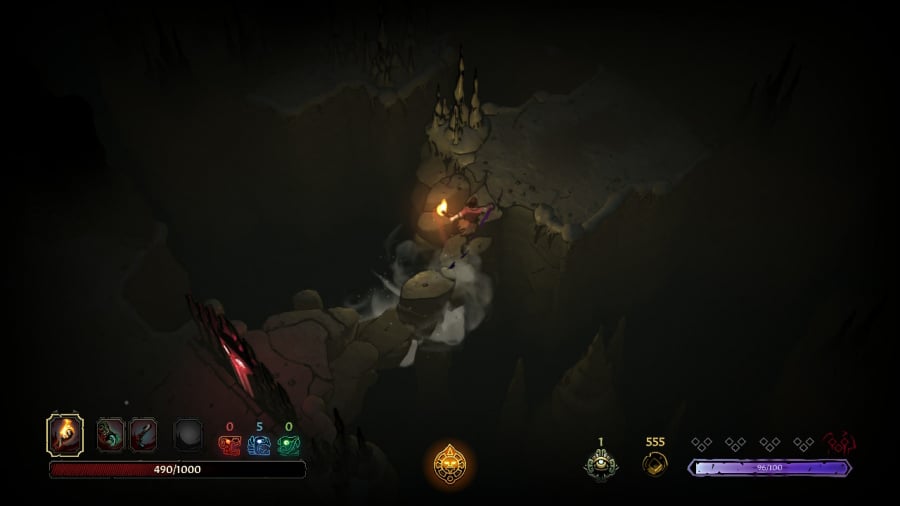 Sometimes a game comes along that changes the way people look at an existing genre. And then another game comes along and copies it. Curse of the Dead Gods takes enormous inspiration from Supergiant’s smash hit rogue-lite Hades. And, we have to say, there are far worse games to draw from – lest we forget, Hades got a coveted Nintendo Life 10/10.

A familiar semi-isometric viewpoint awaits you here, though the temples through which you must journey are a lot more foreboding and, well, dark than the likes of Tartarus and Elysium. In fact, darkness is a major mechanic in Curse of the Dead Gods; you’ll need to use your torch to keep braziers (and enemies) set alight, as you take more damage in the dark.

Basic motion is very familiar, though a little slow-paced. You dodge-roll, block and parry enemies and their attacks while striking back with your held weapon or ranged attack that has you hold the button until intersecting lines flash together, releasing at this time for a more damaging bolt. Yes, it’s all very familiar, but it’s executed well. Your foes are aggressive and you’ll to learn how to deflect their attacks – you can’t just dodge roll all over the place as it’s on a cooldown, but it’s not too punishing of one. It’s more satisfying to get to grips with the blocking as it lends a nicely visceral feel to the combat which its contemporaries rather lack by comparison. Aggression and skill-led play is encouraged by the fact that doing well reduces your cooldown; a successful dodge removes one point, a successful parry two. The incentive to get stuck in and learn the systems is very much there.

The major and most interesting mechanic here is the use of curses, caused by corruption as you make your way through the temples. You’ll fill a corruption bar through various actions and once it reaches the top, entering the next area will trigger an unavoidable curse. These effects are random, and often game-changing. They’re generally a bit of a double-edged sword, as while they mostly make the game harder they will often do so by adding an effect that can also make life rough for the enemies – putting all the environment’s (many) traps on a hair-trigger, or making it so you’re unable to cast any light but removing the penalty for being in the dark – that sort of thing. The only misstep, in our view, is the addition of a curse that hides the effect of any other curses you may pick up. We can sort of see the point of this, but at the same time, it takes away a fair amount of the fun and anticipation if you happen to get stuck with it.

Otherwise, this is a rollicking little roguelite. As you move between stages you’ll pick up relics you can equip, powerful new weapons and blessings from the various Mesoamerican deities – all of which can flip your current run on its head in that thrilling way that only this genre seems to manage. The atmosphere is oppressive, but the difficulty never felt unfairly high – yes, it’s challenging, but you have the ability to mitigate any situation the game throws at you even without additional boons or weapon upgrades.

As you make your way through each area, building corruption, you’ll need to choose which item/reward you want from the next area – exactly like, well, Hades. The difference here is that the upcoming rooms are all presented on the map between stages completely transparently, so you’ll need to make decisions that will visibly lock out all the other options and items. This adds a nice, tangible sense of loss and finality to your choices, and can leave you wondering what could have been if you get killed on your chosen route. What if you’d gone for that extra relic instead of the healing pool?

Between runs, you can spend progression items (such as Crystal Skulls – don’t worry, it’s nothing like that movie) on upgrades such as additions to the (randomised) maps, buffs that can be equipped on your next run, or “favours” that allow you to take a gift from the gods without spending money or taking damage. You’ll need plenty of these to see everything the game has to offer, with multiple different temples to run through each with a distinctly different feel and unique enemies and traps to contend with.

It could be argued that Curse is visually samey, but we think that’s a little besides the point. Each of the temples has its own aesthetic and they sell the gloomy, desolate nature of the locales perfectly well. Games don’t last all that long, either, with a successful run never feeling to us like it outstayed its welcome. Performance is very good, too – the screen can get thoroughly busy and we didn’t experience any hitching or slowdown to speak of.

A breezier, simpler game than its clear inspirations, what Curse of the Dead Gods lacks in narrative it makes up for in focused, crunchy gameplay. Combat is interesting, exploration is rewarding and the systems in play are sufficiently diverse to make this a winner. It won’t consume you forever, but you’ll feel far from short-changed by this game of meaningful, divergent dungeons.

Hyrule Warriors: Age Of Calamity Is Getting A Deluxe ‘Treasure Box’ Edition In Japan