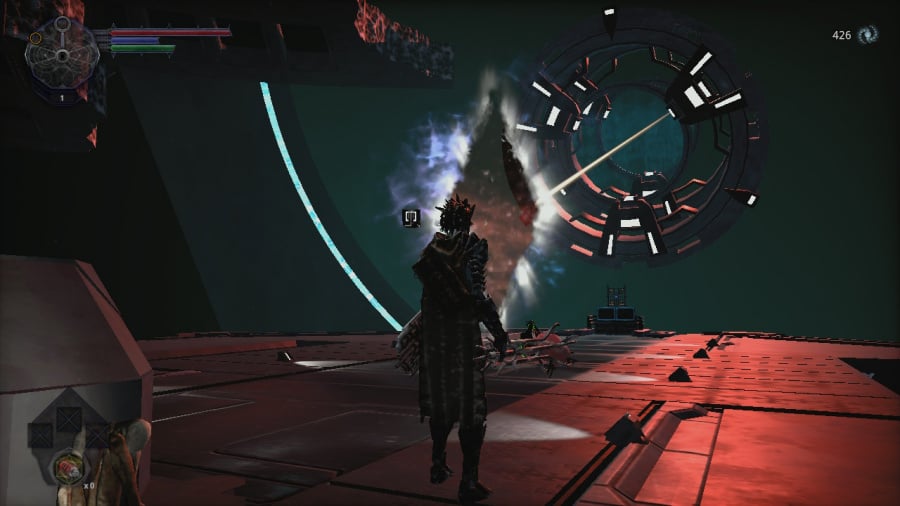 Dark Souls crossed with Dead Space? Bloodborne set within the bowels of a great big derelict space station? Yes. Yes please, we like this, we want this, sign us up! Cradle Games’ Hellpoint has got a great premise, a fantastically atmospheric setting and gameplay that unashamedly pilfers ideas and mechanics from FromSoftware’s superb back catalogue while adding a few little twists and tricks of its own. It should be a success, it should an easy recommendation – especially for Soulslike fans – however, a Switch port that massively downgrades graphics while introducing some pretty serious technical issues results in a sci-fi action-adventure that feels like it’s bitten off quite a bit more than it can chew – on Nintendo’s hybrid console, at least.

The story here, in true Soulslike fashion, is a cryptic thing that you’ll need to piece together haphazardly as you traverse the innards of the Irid Novo, the enormous derelict space station onto which your character is birthed at the beginning of the game. The general gist though, if we’ve managed to pull the sparse shreds of evidence together in any way properly, is that you’ve been created by a mysterious AI known as The Author, who requires that you “collect data” by fighting hordes of hellish space demons in order to save the Novo, which is currently orbiting perilously close to a supermassive black hole in the aftermath of a cataclysmic event known as The Merge. Your standard day out in space, basically.

Fans of FromSoftware will immediately feel at home with the core gameplay loops here as the basic rhythm of combat is essentially identical to the good old Dark Souls series. You’ll attack foes with light and heavy swings of various brutal melee weapons, block incoming damage with your trusty shield and make heavy use of an exaggerated roll manoeuvre which, like everything else you do, is tied to a stamina gauge. Where Hellpoint does mix things up a little with regards to its slow-paced scraps is in the successful introduction of guns. As you level-up your character by hoovering up Axions from defeated enemies and trading them in at bonfir… we mean breaches, you can raise your reflex stat in order to reach a point at which you can handle railguns, rifles, cannons and something known as the Mouth of Filth, a weapon which breaks life down at a molecular level and is therefore probably best handled with care and pointed away from your body.

In another twist on the usual Soulslike gameplay mechanics, both the energy gauge to which your weapons and magic attacks are tied and any health refills you’ve currently got at your disposal are recharged not by resting at a breach, but by causing damage to your enemies. It’s a nice little wrinkle that enables you to pull yourself right out of a hole on occasion, battling back from near death to restock your health charges fully and give yourself the energy necessary to clear immediate threats with a barrage of laser fire from your trusty marine rifle of daemon cannon. Defeated enemies won’t reappear when you hook up to a breach in order to level up either, instead re-emerging after a set amount of time – unless you happen to die, in which case areas will immediately repopulate. These subtle tweaks and changes manage to give Hellpoint’s core combat and exploration its own unique flavour while remaining close enough to the genre’s tried-and-tested formula that fans will immediately feel reassured.

As you discover breach points scattered around the Irid Novo, you can also raise or lower the difficulty of the surrounding area in order to either make things slightly easier or line yourself up for greater rewards by battling tougher foes – something it took us an age to figure out how to do due to the cryptic nature of just about everything going on here. All of the weapons and armour you find as you venture deeper into the space station can be upgraded and fitted with various modules that increase their capabilities, and you can even collect blueprints in order to create your own gear using precious resources gathered on your journey.

Alongside all of this, and dependant on the position of the nearby super black hole in relation to the space station itself – as indicated by a pretty confusing icon in the top left-hand corner of the screen – hellpoints will open up in certain areas, spewing out hordes of tough enemies that drop high-level rewards, weapons and armour. This mechanic, in particular, is really cool but, for some reason – most likely a rather foolhardy adherence to genre expectations – it’s also very badly explained, to the point you may in fact miss its existence or meaning completely and spend the entire game wondering what on earth that diagram in the top corner of your screen is actually pertaining to.

A handful of ill-explained mechanics aside, however, the general exploration and combat here is pretty solid stuff. Enemy variety may not be massively impressive, but they do provide a decent challenge overall and there’s enough variety in locations that the act of pushing steadily forward through areas, slowly discovering secrets and picking up little bits of lore and all manner of strange items as you go, has the capacity to be almost as enjoyable here as it was in the games that have so very obviously provided much of Hellpoint’s inspiration.

As for the Irid Novo itself, much like any other derelict space station we’ve ever encountered in a video-game, it’s immediately the star of the show here. Cradle Games has very obviously expended a great deal of effort into this labyrinthian nightmare of corridors and it’s resulted in a setting that we wanted to explore every nook and cranny of; one that we wanted to push further into no matter how many times we perished along the way. It does suffer somewhat from a lack of direction, there’s no map to help you find your way and some areas are real mazes that it takes quite a while to get a handle on, but it’s just so atmospheric, even with the huge graphical downgrade that’s occurred to get this one running on Switch, that it still manages to impress.

If only Hellpoint had made it to Switch in a better technical state than it has done, it really would have been pretty easy to recommend to fans of tough, Dark Souls-style action RPGs. There’s plenty to like here overall and, having played more technically proficient versions of this one on more powerful hardware, it’s actually a reasonably solid Soulslike effort, all things told. However, there are problems with this port – serious problems – that make playing on Switch feel like a really messy and frustrating experience.

The framerate, which actually manages to hold up pretty well in the first few hours of the campaign, slowly but very surely begins to struggle noticeably, with combat deteriorating into a rather stuttery and unresponsive mess as you progress through later stages. This port’s graphical downgrade then adds to the misery with low-resolution textures on enemies making it hard to parse their movements and attacks as they shamble around you.

These issues make fighting rank and file foes far more annoying and haphazard than it should be, and once you reach one of the game’s boss battles, well, prepare to start pulling your own hair out – we’ve honestly never been so glad to be bald. When faced with a screen-filling monstrosity who can one-shot you at any given moment, the last thing you need is unresponsive controls, a struggling framerate and graphics that make reading attacks nigh-on impossible, but that’s exactly what you get here and, combined with a few instances where the camera turns into a real mess (Consumer boss battle, we’re looking at you), you’re left with an often excruciating experience on a technical level that absolutely sullies the solid gameplay that’s buried somewhere underneath.

Adding insult to injury, loading times when you die can also really drag – we counted up to two minutes on multiple occasions to load back to a breach point – and this, combined with increasingly persistent full crashes to the console’s homescreen, makes it hard to keep going, the whole endeavour coming off as a slog in the end; a messy affair that seemed to get worse the further into the 20+ hour campaign we ventured. It’s a real shame too, because if this Switch port wasn’t so constantly dragged down by technical woes, we’d most likely be handing out a pretty solid recommendation here. Hellpoint has got the combat, it’s got the setting, the atmosphere and a few neat tricks of its own to add to the usual mix – it’s even got co-op thrown in for good measure – but, alas, until there’s some serious patching undertaken to fix the myriad issues here, what we’re left with is a decent indie effort that’s just not up to scratch on Switch.

Hellpoint is a reasonably decent sci-fi/Soulslike effort that sticks closely to FromSoftware’s well-worn formula whilst introducing a few neat new tricks and twists of its own. The combat here is solid, the space station setting often spectacular and the narrative as enticingly cryptic as you’d expect from the genre. However, the whole thing suffers massively due to myriad technical issues on Switch. Constant crashes to the console’s homescreen, a seriously flaky framerate, long loading times and a pretty huge graphical downgrade result in an experience that’s infuriating for all the wrong reasons and one that it’s almost impossible to recommend in its current form. Here’s hoping Cradle Games has some big patches incoming.

Best Of 2020: Zelda: Majora’s Mask At 20 – The Enduring Appeal Of Nintendo’s Strangest Game

Soapbox: How One Large Vegetable Highlights The Issue With Japan-Only Merch