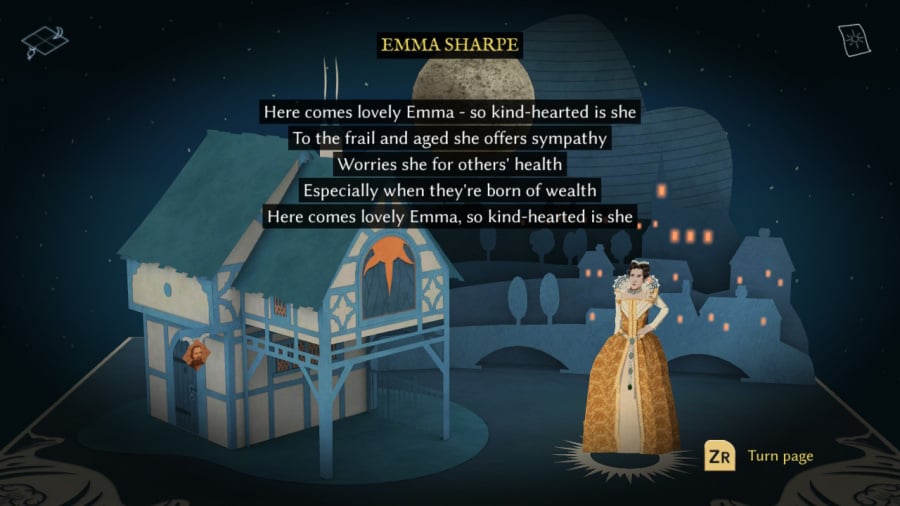 Was it not Shakespeare who said: “fie! I have the plague, and my armpits do weep with pus-filled boils like mustard from a Big Mac”? Well, if you liked that quote, you’re in excellent company with Astrologaster, a bawdy comedy-musical game from Nyamyam that combines the looks of a pop-up book with the content of a rowdy romp through historical medicine.

Astrologaster is not for everyone. If any of the words in the last sentence made you yawn, or you think musicals are literally what awaits you in Hell, then we’re sad to say that Astrologaster may not be your cup of tea. But anyone willing to give this game a try will find it to be a wonderful little nugget of writing and attention to detail that will coerce a smile out of you, one way or another.

The way to play is thus: You are Simon Forman, a medical practitioner with no license to practice medicine, based on the very real, very historical Simon Forman, whose casebooks form the basis of this game’s story. It is the 16th century, and the plague has seized London, but Forman seeks aid from the stars themselves to discover a cure – and discover one he does, creating his miraculous ‘strongwater’ as a result, and garnering quite the reputation as a healer. Now, all he needs is a license, and he’ll finally be taken seriously by his peers.

Fast-forwarding to the early 17th century, you – as Forman – are now taking clients, who come to you seeking cures and fortune-tellings. Since your one job is to read the stars, you can accomplish both with one fell swoop, telling patients that they have The Diabete on one day, and recommending wise investments the next.

The patients you get will ask for your help, but – being a not-quite-doctor in the 1600s – your options are not quite as robust as modern medicine. One patient may tell you that they are “chundering”, gaining weight, and missing their menses, and it’ll take the player’s up-to-date knowledge (and reading between the lines) to read the stars as a diagnosis of pregnancy.

But it’s not that simple for every patient, because they all have motives and secrets. One is trying to trip you up by making you misdiagnose him, so you’ll have to pay attention to every detail he says to get it right. Another patient is trying to bump off her husbands, so she really wants to hear about what deadly diseases they may have to make her job easier. There’s a patient who keeps consuming foodstuffs sent to her by her husband, who is off colonising South America, and you have to tell her that potatoes should not be eaten raw – a fact that Simon Forman himself wouldn’t know, but that you, the player, can tell him by reading the stars – which is a stand-in for your own modern knowledge. It’s an exceedingly clever way to have Simon make the correct diagnoses, as long as you make sure to pay attention to the subtext and subtleties of each consultation.

The patients are all larger-than-life characters – there is very rarely a patient that just has a sickness to diagnose. You’ll quickly find that you have favourites, looking forward to each time they reappear, and every new introduction brings with it some other crazy story that can be guided through the careful (or deliberately careless) reading of the heavens.

One of the best parts of the game is the choral interludes that introduce each of these patients. A Tudor-style choir will tell you about their personality and foibles, preparing you for what’s in store – and how to treat them. A short verse for every patient will inform you of all you need to know, like this verse for a hypochondriac man who loves to be told he has the most deadly and serious diseases:

Rich but not satisfied? Mayhap you have not tried
This one weird trick for displaying your wealth:
Buy herbs and confections to boost your complexion
And pass idle hours tending to your health

These verses achieve several things at once. First, they set the scene quite nicely, striking a historical tone that matches the setting. Secondly, they give you a good idea of what to expect from the client, and thirdly, they show off the best thing about the game’s writing: dripping with sarcasm and subtext, the narrative is constantly making fun of its subjects. No one is safe – even Forman gets his own verses, betraying how insecure and pathetic he is as a person.

There is little to the game beyond reading text and making choices while consulting the stars – a process that’s a little confusing for first-time players – so it’s worth saying that Astrologaster is not a game for people who aren’t into a more visual-novel-style game. But for just £8.99 ($9.99), it’s a fantastic little story game to play over a couple of evenings, and it’s even better played with a partner or friend who can help you with the diagnosing bit. Though many people baulk at the thought of playing a game twice, Astrologaster is one of those that benefits from it, since you can see how different choices affect the story, and better understand the more subtle hints from certain patients.

Overall, there’s very little that we can criticise about Astrologaster, aside from it not being for everyone. But, for those of you who are partial to history, raunchy historical drama, Shakespearean comedy, and games that aren’t afraid to be a little goofy, then Astrologaster is more than worth its price for a few hours of fun.

Astrologaster is perhaps the only time you’ll ever get to play through a pop-up book version of London’s 17th-century medical history. It’s an extremely specific pitch, but when it hits, it hits well – and its musical interludes are as delightful and giggle-worthy as any of Shakespeare’s best. Sure, it’s not going to be to everyone’s tastes, but if you’re looking for something a little different and you’re a fan of the classic British historical sitcom Blackadder, then you could do a lot worse than give this a spin.

Random: Sakurai Won’t Be Sharing As Many Smash Ultimate Photos Next Year