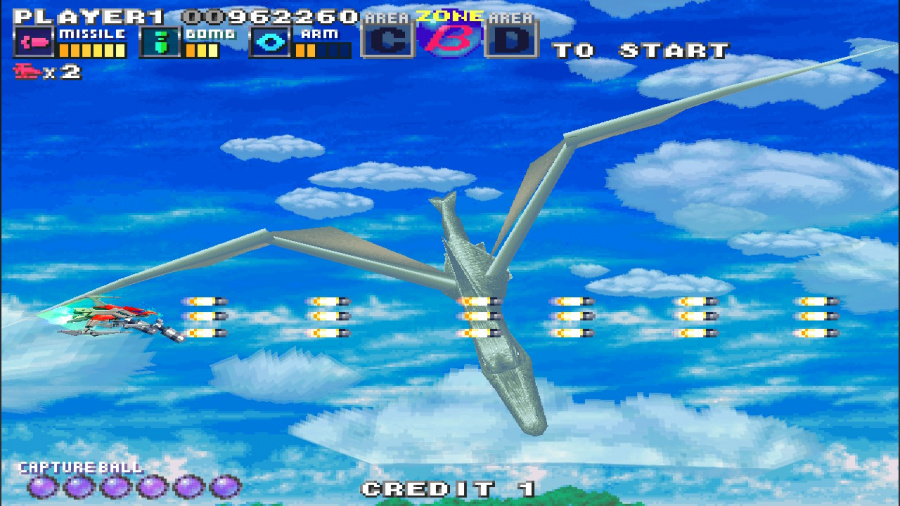 It would have been quite something to witness G-Darius’s directors explaining their ideas to the programming and graphics staff. For a series that had already gone well beyond the standard content for a shoot-em-up, and the most recent entry, Darius Gaiden, featuring 28 elaborate stages, they were probably fearing the worst. And rightly so.

G-Darius, the first fully 3D title in the series, is immensely ambitious. It reduces the total number of stages to fifteen but splits each of them down the middle, allowing you to pursue two totally different routes after a few minutes play. This is handled by a visual countdown bar that requires you to be flying either in the upper or lower quadrant of the screen to choose the direction you wish to head. Demonstrated flawlessly in the opener as you race across the sea, you can either climb skyward to witness a warship destroyed by an off-screen laser, or descend beneath the surface of the ocean, where underwater trains travel through glass tunnels embedded in the coral.

Darius Gaiden, its eminent predecessor, introduced the ability to capture weakened mid-bosses and have them briefly join you in battle. For G-Darius, this feature is greatly expanded upon, fitting your craft with a limited stock of Capture Balls that can command and control almost every standard enemy in the game. Each captured enemy comes with varying properties, bolstering your shot power and range, and can be positioned as shields to protect you from bullets and missiles. You’re encouraged to experiment with different enemy captures to see what they offer, and strategise around them. Mid-boss captures – achieved by first destroying sections of gold armour – are by far the most powerful allies in the game, making it imperative you learn how to snag them.

Additionally, capturing now has several extended functions. Captured enemies can be detonated as smart bombs at any time, the range and strength of the explosion dependent on their size. It can be useful in a pinch, but generally speaking, if you’re going to repurpose your captures you want to do it with the new laser cannon. Triggered with the A button, holding a capture allows you to charge and then release a powerful laser stream for a prolonged period. This laser can easily cut through larger popcorn enemies and save your skin, but its key function is in beam duelling, a feature that first appeared in Taito’s own 1991 Metal Black.

Laser Duels are initiated during boss battles when you see your adversary start to charge up, at which point you manoeuvre right in front and fire your laser at the same time. With the lasers locked, you tap the fire button to overwhelm and cut through. This is the fastest method for ending a boss fight prematurely, and as adrenaline tense and thrilling as it is, it’s a skill that takes practice to pull off in the heat of the moment. These features make Capture Balls indispensable, and thankfully replenishments are regularly dropped by purple enemies.

Although its structure is both daring and complex – and has no right to work as fluidly as it does – G-Darius is also dressed to impress, and it’s never impressed more than it does in this Switch port. Dubbed G-Darius HD, you’re presented with two modes: the original resolution arcade game and a shiny high definition makeover. The original is really only useful for either directly comparing to the HD remake (and the difference is huge) or running on a standard resolution CRT with native scanlines to create an authentic old-school arcade experience. Beyond this, its presence is totally obsolete.

Assuming you can appreciate the arcade polygons of 1997, HD mode looks absolutely beautiful and runs smooth as silk everywhere except during moments of slowdown – which is accurately reproduced and totally required. Its new sheen is spectacular when played on a large display, and Taito has added a range of screen adjustment options that allow you to play it in its original aspect ratio with a range of wallpapers and info panels, or stretched full-screen (which actually adapts the image fairly well).

G-Darius is a perfect candidate for this treatment, too, since the game itself was probably considered, at the time, to be a series send-off of sorts, with no formal follow up until Dariusburst arrived twelve years later in 2009. As such the team have gone in all lasers-blazing, creating one of the most impressive-looking space operas of them all. Graphically superb and cinematically epic, each stage – and each alternate route through that stage – serves up a dynamic range of otherworldly landscapes crammed with set-pieces. Sometimes there’s so much going on in the background, from giant, soaring pterodactyls to the heated chambers of star-destroying vessels – that you shouldn’t feel guilty for being distracted. G-Darius is probably the series cinematic pique, exceeding even the more recent Dariusburst in terms of visual creativity.

Darius’s lore in the battle against the aquatic Belsar army is a thing of wonderful aesthetic invention. G-Darius magnifies its robotic nemeses into larger-than-life figures. Boss encounters are far more drawn out than in previous games, and altogether more colossal, requiring you to grit your teeth as dwarfing space crustaceans spit curtains of glowing laser fire at you and drill through an assortment of murderous patterns. Dimension Diver opens up twin portals, peering his head out of one while his tail writhes at the opposite side of the screen; while the mammoth Fire Fossil, a lava red mecha Coelacanth, is so enormous the screen can’t hope to contain her. And the music, though not quite as good as Darius Gaiden’s soundtrack, is still an excellent experimental piece of work by Taito’s in-house Zuntata band, evoking the enigmatic beauty of the game’s marine universe with strange machine-like samples, off-kilter beats, and haunting industrial echoes.

A spectacle of visual ingenuity coupled with ambitious design work, G-Darius hasn’t held back in any area; not least the difficulty. If you were expecting to sit in for the ride, think again. The map, unlike previous games where route difficulty was more scattered, tends to go up for easier stages and down for harder, and the general rule is making sure you grab all power-ups to increase your shield, bomb and laser into a force to be reckoned with. The other rule is don’t die, preferably ever, because doing so drops your firepower by one sub-level which can be catastrophic in the latter half of the game. While it’s possible to recover from a death, it’s not easy, with enemies and bosses being far more resilient to a weaker arsenal. It’s only five stages for a clear regardless of the route you choose, but with G-Darius’s faster bullets and busier screens, it’s imperative that you learn to wield the capture ball and its accompanying bomb and laser utilities.

With this in mind, one omission from the package that’s sorely lacking is a practice mode. M2’s Darius Cozmic Collection had a very robust set of options that allowed you to set up any stage or boss encounter with shields and weaponry of your choosing, and was incredibly useful for learning the game. Because optimal weapon power is a requirement, it doesn’t help to just hit continue, as you’re thrown back into the fray at a disadvantage even with the minor care package it gifts you.

This oversight notwithstanding, this is still the absolute definitive version of G-Darius to-date. Although it’s appeared on several consoles and collections prior, none of them have the polish or feel of this HD upgrade. Skipping from the original version to the high definition is an eye-opener: the equivalent of being underwater and then breaking the surface to see again. The original artist’s work is paid incredible tribute, and their universe – an ocean tank of soaring cliff faces, futuristic technologies, and in one instance, dinosaurs – is a sight to behold. It’s also interesting to see the influence it had on games like Dariusburst and Border Down, and those it drew from Metal Black.

Brush off that arcade-grade resolve and get ready for an old adventure realised in all-new clarity. This is a shoot-em-up experience like few others, and while it has all the genre hallmarks of intensity and adrenaline-inducing action, it binds it with superlative artistry, epic set-pieces, and an alien world as strange as it is wonderful. The sense of incrementally increasing in power and being able to turn the tide against the Belsar is what makes G-Darius so much fun to play. It’s initially threatening, but once you learn the lay of your first route, get powered up, and figure out how to make practical use of your captures and duelling laser, it’s safe to say G-Darius really hits the spot.

Best Of 2020: An Ode To The 3DS, Nintendo’s Workhorse Console