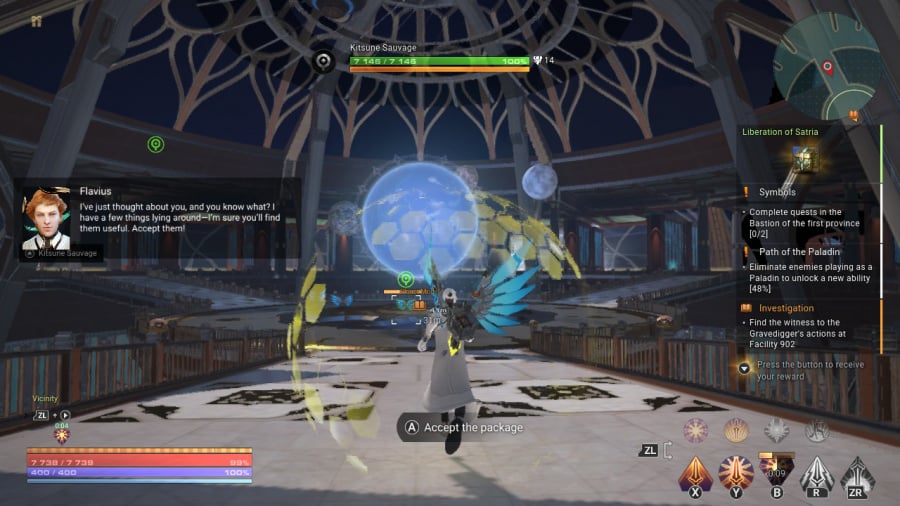 Editor’s note: The developer claims that a patch is currently awaiting certification with Nintendo which aims to improve the performance of Skyforge on Switch. However, it would seem the availability of this patch is still unknown at present. With that in mind, we’re publishing our review ahead of the patch going live, so please keep in mind that it may address some of the issues raised in this review.

Allods Team’s Skyforge, which has been doing the rounds since back in 2015 is, at best, a pretty mediocre MMORPG – even when it’s running as smoothly as it can and looking relatively decent on PC, PS4 or Xbox. This is a sci-fi/fantasy effort that flings players headlong into uninspiring, repetitive missions that take place in dull, lifeless locations where you employ the same handful of bog-standard moves ad nauseam against enemies who really don’t seem to know or care that they’re in combat. On Switch, this all-encompassing mediocrity takes a nosedive into proper disaster territory.

In Skyforge you play the part of an immortal, an all-powerful warrior whose job it is to protect the citizens of the Planet Aelion, a world under siege from alien invaders since its god and guardian, Aeli, suddenly vanished. The big hook here is that there are eighteen different immortal classes to play as and freely switch between at any point, fifteen of which – unless you’ve foolishly paid real-world cash for an upgraded edition – must be unlocked by forging a path with one of the three base types – Paladin, Cryomancer and Lightbinder – that are available from the get-go.

The rhythm of taking on missions and engaging in combat here is inoffensive enough, and Skyforge throws you into its action commendably quickly. After a brief (and absolutely broken) conversation with Herida, the game’s friendly neighbourhood immortal advisor, you’re quickly shuttled off to one of the game’s uninspiring, corridor-filled battlegrounds where you’ll use a combination of light and heavy attacks and “spectacular” godly special moves to tear Reapers, Phytonides, Oceanids, demons and all manner of other alien nasties apart.

As you fight and kill and die and repeat, you’ll advance your stats and unlock new moves as well as pick up underwhelming loot and shiny credits from the bodies of your fallen foes. Skyforge uses a prestige system that unlocks access to more powerful items and gear as you progress, and this is tied to the number of followers your character has managed to accrue through their good godly deeds. There are, according to the game’s turgidly slow maps, a fair few planets and locations to travel to as you pump your time into upgrading and unlocking here; this certainly isn’t an adventure that’s lacking in content, and it seems easy enough to join up with other players in order to blast through the hackneyed missions in a party should you choose. However, the real problem – and the overriding issue we have with this Switch port – is that it’s such a completely shambolic mess on a technical level that it’s hard to care or be bothered about sticking with it for the length of time it takes for its various mechanics to settle in and evolve.

The idea of playing this version of this game for long enough to unlock fifteen further classes in the hopes of finding something that tickles your fancy or clicks on a gameplay level is a truly nauseating prospect. If we seem as though we’re being a little rude towards Skyforge, well, unfortunately, if you’re willing to hand in a dumpster fire of a port like this, it’s all you can reasonably really expect in return.

The Switch may have had its fair share of ropey conversions over the years, but it’s also shown that, with a bit of hard work and effort, even great big AAA titles can arrive on Nintendo’s hybrid console in an enjoyably playable state. Skyforge, even on more powerful consoles, is not a game that seems like it should have any problems making the jump here. This ain’t Warframe-level stuff; it’s not particularly impressive to look at, battles take place in small, bland arenas, there isn’t a great amount of detail anywhere and fights consist of relatively small numbers of enemies. Why then, are we looking at a port that stutters constantly, bugs-out repeatedly, crashes back to the console’s home screen, has excruciating loading times and absolutely refuses to run smoothly at any point from the moment you boot it up until you finally turn it off in frustration and dismay?

Pretty much every aspect of Skyforge runs poorly on Switch as things currently stand. The audio pops, hisses and cuts out constantly, menus are unresponsive and take time to respond to your inputs and NPCs stop talking mid-sentence during conversations that see their mouths blabber away even when nobody is speaking. Items that you loot take an age to load as you peruse their models in your inventory, muddy textures constantly pop into view in front of your face, the loading times are far, far too long and frequent as you move from area to area, the resolution in docked and handheld is dire… and this is all before you’ve even started out on a mission.

Once in combat, things become even messier. Engaging with enemies here is a stuttery, jumbled disaster that makes fighting feel terrible. You can still put combos together – hit X twice and follow it up with Y and your Paladin will perform a couple of hits followed by a lightning strike – but it’s always delayed and never feels like you’re doing what you want when you want. Get silly enough to try pulling off a special big-time god attack and the whole charade slows to a desperate, janky crawl.

Enemy attacks, especially in handheld mode where Skyforge is running at a seriously low resolution, come across as unreadable flailing; a mess of limbs that can’t really be deciphered. Worse still, the woeful AI means that your foes will quite often stand around as you batter them. We’ve fought bosses in this game where we just stood still in their faces and wailed on them, never dodging – a move that’s infuriatingly set to a click of the L3 button and can’t be changed – or using our little shield bubble as they just stand there and take it until they die.

There’s also the spectre of ‘pay to win’ to deal with here. If you can stand engaging with this mess for long enough that you feel you want to spend actual cash unlocking all those different classes, you can also pony up to advance faster by buying into a premium system that has a VIP level which rewards various stat bonuses. We didn’t play quite enough with the game to see how this actually plays out over the long-term, but incremental stat buffs that you can pay to gain are not a good look, let’s face it. There’s also a ton of hugely expensive cosmetic gear to splash out on, but honestly, it all looks so bad due to the low resolution and muddy textures that it’s hard to understand why anyone would ever bother. It really doesn’t feel great to tear into people’s work like this, but Skyforge on Switch genuinely feels like Allods Team did the absolute minimum it possibly had to and then shipped; it’s hard to believe anyone played this and felt like it was in any way good to go.

If there weren’t endless, constant technical problems getting in the way, Skyforge just might, maybe, be a borderline passable time; a truly bog-standard MMORPG to while away a few hours blowing through, but in this state, it’s genuinely not worth looking at. Of course, it is free to play, so there’s no harm in downloading it and giving it a whirl for yourself – besides the fact it’ll cost you twenty-one gigabytes of your precious internal storage space – but honestly, we just can’t see anyone spending more than a handful of hours with this game in its current state before jacking it all in. Your free time is worth more than this, honestly.

Skyforge is a properly mediocre MMORPG that could, perhaps, have been a reasonable enough little timesink for a bunch of friends or solo players who just want to mindlessly blow through its content without thinking too much. There’s no shortage of content here, and the idea of having eighteen different classes to master is an attractive one. However, this Switch port is such a huge disappointment on a technical level; it’s such a lazy, janky, stuttery, buggy, low-resolution mess that it’s hard to see how anyone could be bothered to stick with it for long enough to properly engage with anything it’s got to offer. If you’re in need of an MMORPG to play on your Switch right now, we recommend you download and play just about anything else that’s available because seriously, this ain’t it.