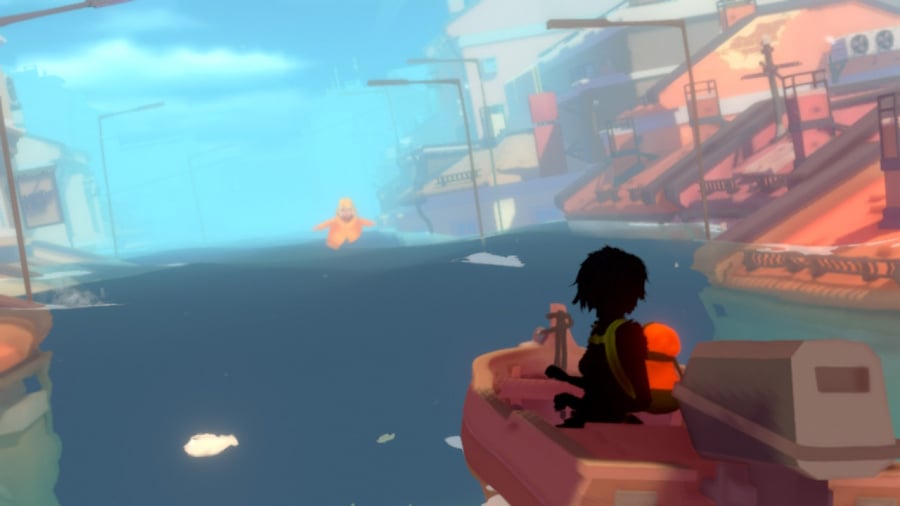 There are simply not enough games where you get to ride around in a boat. It was the best part of Assassin’s Creed: Black Flag, formed the pulse-pounding backbone of Hydro Thunder, and it’s everyone’s favourite bit in The Legend of Zelda: The Wind Waker. Cars, planes and humans are cool and all, but boats? They really float our… what was it again?

Great news for us enthusiasts – Sea of Solitude has a pretty significant amount of boating action. Just like in real life, the ocean here contains a gigantic supernatural monster that wants nothing more than to scoop you up into its enormous mouth and consume you, crunching your bones between its teeth. It’s concerning, then, that also just like real life (in a few years’ time), the ocean seems to cover 90% of Sea of Solitude’s beautifully-realised world. And it really is stunningly attractive, even in handheld mode – the gorgeous architecture married with the constantly rising and falling ebb and flow of the water lends it an aesthetic quite unlike anything else, raising the proceedings above the level of its unfortunately rather generic and meandering story.

Indeed, we hate to say it, but we didn’t get a lot out of Sea of Solitude as a narrative experience. It pushes its story but doesn’t marry it brilliantly with the mechanics, so we often felt as though we were playing an enjoyable platformer that constantly talked as us to very little effect. It’s just so very familiar in its tale of clumsy and obvious symbolism, with drip-fed details that really don’t conjure up any kind of resonance. There’s some heavy stuff here, but it’s not enough just to be heavy, it also has to be interesting – and we found Sea of Solitude disappointing in that regard. At least in terms of how it tells its story.

As for the gameplay itself, there’s definitely something there. Exploration is relatively limited but the world feels expansive; a neat trick considering it’s quite linear. Journeying through the game’s environments on foot is always enjoyable thanks to responsive controls and interesting level layouts. The locations feel organic despite the aforementioned linearity, so when you manage to figure out how to reach higher ground, or open up a new path that allows you to move forward, it’s always satisfying. You’ll also find messages in bottles and hidden seagulls that act as Sea of Solitude’s collectables, and while it’s enjoyable to seek out whatever esoteric path is required to grab them, the reward is just another snippet of vague and sometimes irritatingly banal lore.

We’re back in the “cinematic platformer” territory of the likes of Little Nightmares; indeed, there’s a section not far into the game that takes you into a ruined old school that almost begs for comparison to Bandai Namco’s recent sequel as ghostly, red-eyed children swarm after you. Endemic to the genre, though, is a good deal of waiting around. You’ll find in the flooded sections that you spend a fair while just observing the pattern of the lingering giant monster – if you’re in the water when it catches you, you’re dead. You don’t lose much progress, but you will watch the same identical animation of Kay being hungrily devoured. It’s quite fun and tense getting around while ensuring you don’t spend too much time in the drink, but ultimately it’s always the same. Scout around for the nearest walkable surface, plot the shortest route between yourself and it, jump in the water, swim there, climb out before you get munched.

One thing that Sea of Solitude always delivers on is visuals and performance – as we’ve mentioned, the game looks awesome, and we never noted any meaningful compromise in its framerate or fidelity no matter how busy the screen got with pouring rain, rising and falling water, and clutches of demonic kids giving chase. It’s a very, very impressive-looking title and something of a visual showcase for what the Switch can do (rather like the recent Crash Bandicoot 4 port). We did notice some irritating glitches though, where water levels would seem to interfere with our ability to clamber onto a ladder or a piece of safe ground, resulting in the occasional unfair death.

It’s a shame, too, that the voice acting has been completely re-recorded for this Director’s Cut – the new voices, while perfectly well-performed, give the game an almost “Saturday morning cartoon” flavour and lack sincerity in places. The sequence with the bullies, for example, was quite haunting in the original as the tormentors sounded almost impassive in their behaviour, like real psychopaths. Here, though, they have the tone of someone like Nelson Muntz; generic schoolyard tykes.

Despite a somewhat lacking narrative and a fairly short length – we saw the (beautiful) credits in less than four hours – Sea of Solitude is fun to play while it lasts. It looks superb and there’s plenty of variety in the locales even in its brief running time. Sadly, though, it’s not a standout – it wasn’t on its original release and it still isn’t here on the Switch. It’s no walking simulator, but in trying to marry its story with somewhat rudimentary platforming gameplay, neither are entirely satisfactory. Of course, your mileage may vary in what the various heavier themes mean to you, but we found them pretty leaden and uninteresting takes on what are admittedly quite universal issues.