To celebrate the 35th anniversary of The Legend of Zelda, we’re running a series of features looking at a specific aspect — a theme, character, mechanic, location, memory or something else entirely — from each of the mainline Zelda games. Today, Gavin struggles to gather the necessary items to get his multiplayer quests going in the first place…

First up, let’s preface things by saying that this isn’t going to be some sad story about a ‘Billy No-Mates’ who couldn’t scrounge up a few friends to play video games with. Promise.

I wasn’t the most gregarious young adult, sure, but whipping up enthusiasm for kart races or deathmatches wasn’t totally beyond me. Later, university housemates were easier to corral and we’d regularly gather around a GameCube and blast through rounds of Mario Kart: Double Dash!! of an evening — or, on occasion, a Tuesday lunchtime. Students, huh?! Tsk.

If rounding up three buddies wasn’t the hardest thing in the world, even for a socially-inept teen like myself, the Four Swords games presented more significant obstacles: namely, finding three buddies that each owned a Game Boy Advance and a copy of the game and a link cable. That was a mighty challenge, and one I simply wasn’t up to at the time. The result? A big old gap in my personal Hyrule Historia.

The first multiplayer-focused Zelda game, The Legend of Zelda: Four Swords on GBA, came bundled with a port of a little SNES game you might have heard of, so you could totally ignore the curious add-on adventure with multicoloured Links and slice through A Link to the Past on a portable. And so I did.

You see, my pals at the time had PlayStations (if they had a console at all), so having gone the N64/GameCube route, I was already isolated, gaming-wise. Still, the promise of a cool frosty beverage would have been sufficient to bag me three Links willing to take up arms against Vaati, but getting hold of the gear necessary to start the adventure in the first place was always the real issue. To this day, I’ve never played a multiplayer Zelda game as it’s meant to be played.

Worried that perhaps I kept poor company and just needed a better calibre of Nintendo-phile acquaintance — people who came ready-equipped for an adventure! — I asked my Nintendo Life colleagues about their experiences with both the original Four Swords and the GameCube sequel, The Legend of Zelda: Four Swords Adventures. A couple dozen people who write for a Nintendo-focused website should turn up some Four Swords faithfuls, no? Much less of an ask, except it was only available for four days back in 2014. Why? Err, Nintendo.

A quick survey around our (virtual) office revealed that, in fact, I wasn’t alone. Even in our uber-fan-filled ranks of staff and contributors, only three people had managed to play Four Swords as nature (well, Nintendo) intended — with four people — and one of those was for a short while at a retro convention.

The whole notion of a multiplayer Zelda game feels like a contradiction to my perception of the series; a dichotomy I can’t quite get my head around, perhaps because I’ve never properly experienced it. I’ve always been a little jealous of people who play through these games with their partners or friends, switching controllers periodically or having a silent partner along for the adventure — their own personal Navi (minus the shrill “Hey listen!”, of course). For me, Zelda has always been about the lone adventurer off on an epic quest — myself and Link in the same boat — yet suddenly that wasn’t an option; Four Swords didn’t just encourage playing with friends, it required it.

Or it did initially. Nintendo would re-release Four Swords free for a limited time via DSiWare during the 25th anniversary Zelda celebrations (yes, an entire decade ago), and again in a blink-and-you’ll-miss-it appearance on the 3DS eShop (4 Swords, 4 Free, 4 Days Only!), which is when I finally played the game in enhanced form. Ported by Grezzo, the Anniversary Edition added a single-player workaround similar to that of the GameCube sequel, and multiplayer now only required three friends each with a 3DS! I burned through it solo, though — my only Nintendo handheld-owning buddy at the time was rocking a DS Lite. Or, more accurately, had a DS Lite in the back of a drawer somewhere. Useless.

Playing solo was fine, though obviously suboptimal; tellingly, I’ve forgotten almost everything about the game. To get the experience the developer presumably intended, the barrier to entry was far too high for Joe Gamer, or even… erm, what do you call someone with more knowledge and enthusiasm than a Joe? Tony? Yes, Tony Gamer. He had trouble playing Four Swords, too.

Having friends with Game Boys was just the first hurdle; they also needed a copy of the game each, and four players would need to daisy-chain three GBA Link Cables together. It’s not the worst shopping list of requirements, granted — I’d managed to wrangle the expensive kit and enthusiastic friends for this type of thing before — but the likelihood of cash-strapped gamers buying duplicates and equipment they’ll likely only use for this one game wasn’t realistic.

Four Swords Adventures dialled that probability down from ‘unlikely’ to ‘impossible’. I remember looking longingly at footage of four GBA’s connected to a single GameCube via four separate (and bespoke) GC-GBA Link Cables and being wow-ed by the possibilities of off-screen play. Remember, we were many years away from Wii U’s asymmetrical gameplay back in 2004 (2005 in Europe), and the potential of a joint experience unbound by a single screen was mind-boggling — it still is, in fact.

Yep, Four Sword Adventures sure looked neat-o… just absolutely, thoroughly impractical, is all. I never even owned the GameCube entry until a couple of weeks ago. My few GBA-owning pals in 2005 didn’t need a copy of the game this time, but none of them were going to buy a GameCube-GBA link cable just to play a one-off game on their mate’s console. We were poor students! Even with Tuesday lunchtimes free to watch Neighbours and Countdown (when we weren’t burning around Baby Park), wrangling the kit to get a Four Swords Adventure off the ground just wasn’t going to happen.

Okay, but where’s the bit where you talk about the games and how great they were? Sorry, friends — this is it. Yes, a single-player mode was included on GameCube, but I haven’t played that, and I’m not going to. Come on! Playing Four Swords with a single sword? That’s just depressing.

This multiplayer pair remain for me a beautiful idea; a dream that’s too impractical to make real. When I asked around to see who had played them properly, Zion — one of our Triforce of lovely NL video producers — told me of his ultimate god-tier experience with Four Swords Adventures: played using five TVs with five GameCubes (four of which were paired with Game Boy Players) at a retro gaming convention several years ago. Can you imagine? You wouldn’t even have to worry about your GBA running out of batteries and booting everyone back to the title screen. Now that would be living the dream. 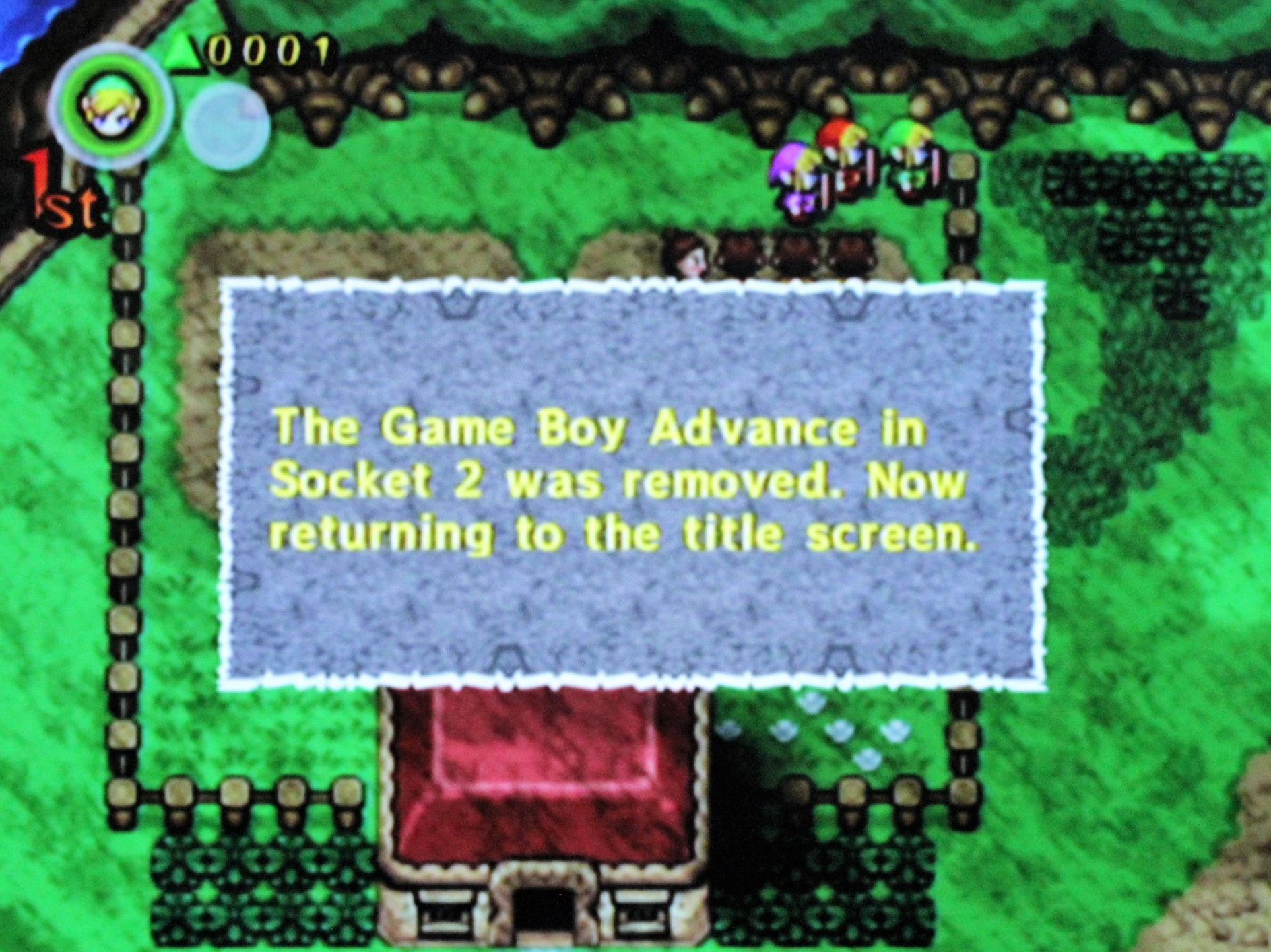 Later Zelda games would explore more accessible multiplayer thanks to online play, but as with many a dream, I’ve been fascinated by the ‘impossible’ GameCube entry for years. Thanks largely to Zelda’s 35th anniversary and the GBA’s 20th birthday, I’ve recently taken to acquiring the consoles and cords needed to host a full Four Swords blow-out and I’m just one GBA and a cable away from the Full Monty™. I fully intend to plug this gap in my series knowledge as soon as possible…

Hmm. Back to Breath of the Wild, I guess. The beauty, the isolation… who needs people, right?!

Nintendo’s ‘Digital Deals’ Sale Is Now Live, Up To 75% Off (Europe)

Team Xbox Celebrates Earth Day: Here’s How You Can Get Involved