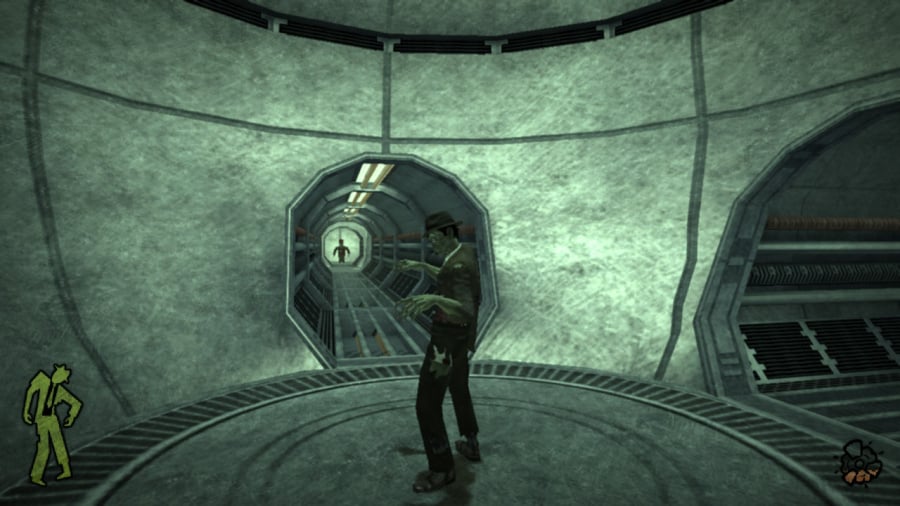 It would probably be the most clichéd thing in the world to make this observation, but Stubbs the Zombie In Rebel Without a Pulse is something of a zombie itself; a game that wouldn’t die, despite widespread apathy. It has something of a reputation as a “cult” hit, but we’re not entirely sure that’s justified. The main selling point of the game was always that it was made in the Halo engine – a fact that becomes most apparent when you hop in the Sod Cannon tank in the second area. Unfortunately, the game seems to have inherited the worst aspects of the classic Bungie series, with enormous, featureless areas and poorly-defined objectives without the salve of having some of the best shooting action ever.

Taking control of the titular Stubbs, you’ll journey through a 1950s Americana-inspired world engaging in rudimentary combat, possessing people and – of course – chowing down on lovely, buttery brains. “Being the zombie” is a compelling idea, and initially it seems like you’re going to have some almost Wonderful 101-esque fun recruiting the undead to your side and forming a groaning army of flesh-eaters, but it quickly becomes clear that these zombies are as dense as you’d probably expect. Fitting for zombie lore, not so great for enjoyable gameplay.

You can have your minions follow you around, but they’ll get hung up on the slightest little incline or seam in the environment, hovering uselessly until you double-back to collect them. This forces you to play terribly conservatively, as you’re more or less defenceless without a meat shield of willing sacrifices and Stubbs moves extremely slowly. His initial attack is a single-press melee swipe that seems to do a random amount of damage and can occasionally dismember, but the main reason to use it is to stun enemies into a state where you can grab them with the X button and chow down on their brains.

Thought-noshing, you see, is the way you replenish your health and various zombie powers that are acquired as you make your way through the game. At the start you just have a (ho, ho) flatulence ability that causes Stubbs to unleash an almighty Bronx cheer, stunning every human in the stench radius and making them easy fodder for a grey matter platter. You’ll later be able to throw “grenades” made out of exploding organs, roll your head along like a bowling ball and – most interestingly – possess other characters, allowing you to take control of them to help turn the tables.

It’s here that Stubbs the Zombie is at its best – depressingly, whenever you’re not playing as Stubbs. Blasting away with your possessed soldier or whoever makes the game into a more conventional third-person shooter, though not exactly a great one. We’d argue it’s not a great sign when the central concept of your game – being a zombie – is less entertaining than your bog-standard shooting, but Stubbs feels like a flawed premise to begin with. It’s a fractured, confusing game that feels more like a proof of concept than a complete entity of its own.

The attempts at comedy registered to us as wide misfires, but – say it with us – your mileage may vary. The ghoulish horror of munching innocent peoples’ brains is amusingly vivid, but having the people scream “I HAVE A WIFE AND KIDS” as you murder them swings the proceedings sharply into unpleasantness. And not the funny kind of out-there gonzo unpleasantness you’d see in the likes of The House of the Dead: Overkill or No More Heroes; just ugly, mean-spirited nastiness. It’s the kind of decision that seems to inform the rest of the “comedy”. It’s not prudishness – it simply isn’t funny enough.

And that’s all it is, really. You’re wrestling with the mechanics throughout, munching brains in unskippable cod animations until you’re able to use one of the four powers (two of which are basically useless), then trying to figure out where to go next until the handy waypoint appears and directly shows you. There are cutscenes, but they’re not funny. The visuals look bland and empty. It has character for sure, but it’s irritating. It’s a game that, in 2021, has really got nothing going for it besides any nostalgia you may already have. It’s a well-ported, smooth version of a game that wasn’t good when it originally released and has aged like milk. There’s a two-player mode, too, if you want to share the pain.

If you already have a soft spot for Stubbs the Zombie, you’re going to have a perfectly fine experience here. But we wonder why on earth anyone would hold a candle for a game this obviously flawed. There’s some ambition here for sure, but something is always working against it. You can’t lose yourself in its mindlessness because your character is too weak. You can’t really formulate a decent strategy using your powers because you can only gain access to them through the rote melee combat. The jokes didn’t make us laugh. The premise is fun but the gameplay simply doesn’t do it justice. We’ll say it again – in order to make Stubbs the Zombie fun at all, you have to possess one of the firearm-wielding humans, thus transforming it from a load of baffling nothing to a pretty dull shooter. Please, no more resurrections for Stubbs. Let the man rest.

Unto The End: A Souls-like Where Fighting Isn’t Your Only Option