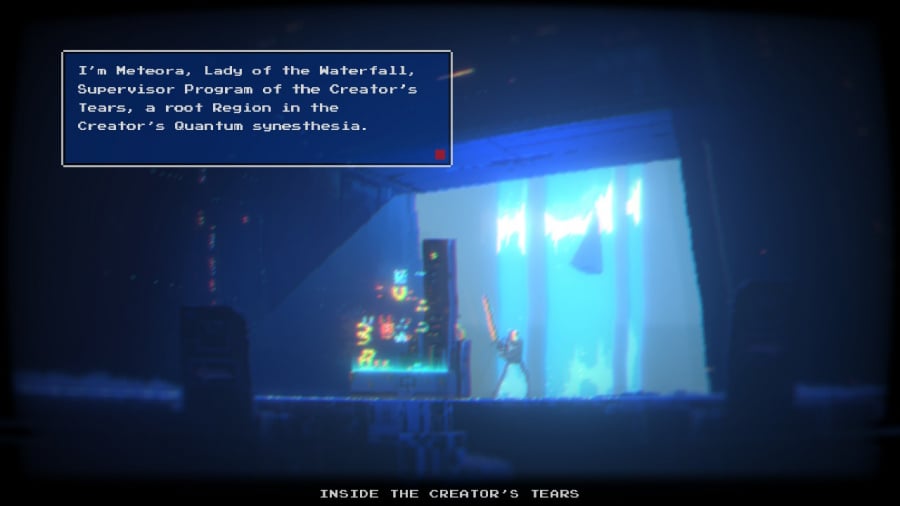 It’s 2021, yet it somehow still feels like we’re in the 1980s. We’re at a point in time where those who were born or grew up in the ‘80s are now expressing their love for the decade through the arts, resulting in cultural behemoths like Stranger Things and Ernest Cline’s Ready Player One. Unfortunately, nostalgia has often seemingly taken precedence over good storytelling, resulting in some rather questionable throwbacks (looking at you, Mr. Cline). Thankfully though, with so many ‘80s-themed books, movies, and games to choose from recently, it’s gotten incredibly easy to filter out the great from the poor.

Let’s be clear right from the start: Narita Boy is a great game. It’s an action-oriented Metroidvania that absolutely leans into a heavy ‘80s, Tron-like aesthetic, but never lets it overshadow the world or its characters. The pixelated visuals feel retro and yet distinctly modern at the same time, with beautiful animations, bold environment design, and an optional CRT filter that enhances the overall tone of the game (though can occasionally feel a bit too much). For newcomers of the Metroidvania genre, Narita Boy isn’t the most accommodating title to start with, but it’s certainly one that rewards patience and exploration.

The overarching narrative sees you take on the role of Narita Boy, who must traverse the Digital Kingdom within a video game to battle the forces of HIM, a virus that has stolen the memories of The Creator, the game’s, uh… creator. HIM deploys its minions known as Stallions throughout the world, and it’s your job to obtain the legendary Techno Sword, take down the hordes of corrupt enemies, and restore The Creator’s memories.

Narita Boy wastes no time in easing you into its surprisingly complex world. It drops you in with almost no build-up or introduction, and you’re left to explore the environment and meet its many weird and wonderful digital inhabitants. There’s an abundance of seemingly nonsense names and phrases like ‘Son of Trichoma’, ‘Creator’s Tears’, and ‘Citadel of King *NumStr the Horseman’ (no, really). It can all feel a tad overwhelming at first, but as you make your way around, each narrative thread starts to fall into place, and you’ll find yourself thinking “ah, so that’s what that is!”

On the flip side, there’s absolutely no doubt that the game could have made a few quality-of-life additions to the gameplay and structure to make things a little more digestible. For example, there’s absolutely no map to speak of, and while the environments are hardly as complex as your average Castlevania, for instance, there are quite a few doorways and passages for you to get lost in. When half the game entails collecting Techno-Keys and gaining access to new areas, a map – or at the very least some sort of guide – could make all the difference. In addition, the NPC dialogue is purposefully vague and obscure, which for the most part is great, but there are definitely a few moments where you wish a character would just say “go here, do this… off you pop!”

Where the game truly shines is in its excellent combat. Early on, you’ll pick up the Techno Sword, and from there you’re gradually introduced to more and more moves and abilities. Attacking enemies feels fluid and intuitive, and the dodge mechanic not only lets you avoid enemy attacks, but also places you behind the enemy, giving you a great opening to launch a counter-strike. In addition to standard melee attacks, you can also utilise the techno sword as a shotgun, unleashing major damage upon one enemy. Alternatively, you can hold down the ranged attack button and fire off a devastating beam of energy that will wipe out most enemies in one swoop. Naturally, this takes up precious bullets that slowly reload over time.

As you get further into the game, you’ll then gain access to ‘Wild Fire’ abilities, which come in red, yellow, and blue varieties. Activating these enshrouds Narita Boy in flames, boosting his attack damage against enemies of the same colour type. It comes with a massive trade-off, as your defence against these enemies also takes a big hit, so while there’s undoubtedly a temptation to run in with reckless abandon, you’ll need to be careful and keep your guard up at all times. Each Wild Fire ability also lets you call upon one of the three ‘Dudes of Trichoma’, who act as temporary familiars to aid you in battle. Using them requires a certain amount of energy, and are best saved for moments of desperation.

The range of enemies you’ll come across is vast, and each type has its own strength and weakness. Some simply shuffle along and flail their arms at you in a largely futile attempt to deal damage, while others can fire projectiles, explode on impact, or morph into even bigger, stronger versions of themselves. The game consistently introduces you to new enemy types, and not a single one feels like it’s overused. The boss battles in particular are truly epic; you’ll be going against everything from a dragon to a delightful French dandy, and these segments are backed up by truly awesome backdrops and sweeping, synth-heavy music.

There are plenty of surprises during your journey through the Digital Kingdom. We’d be remiss to spoil them here, but needless to say, you won’t spend the entire time walking on your own two feet. The pacing of the experience is masterful; you’re constantly moving from one fascinating location to the next, and if it weren’t for the occasional moment of frustration at the game’s vague instructions, it would be absolutely ruddy perfect. It’s all anchored by a surprisingly thoughtful tale, and the segments where you effectively relive The Creator’s memories are particularly impressive.

Ultimately, there’s little more we can say except just get Narita Boy downloaded ASAP. If you’re a fan of Metroidvanias or, God help you, the ongoing ‘80s fad, then you owe it to yourself to play this game. Its world-building and razor-sharp combat make it more than just “yet another ‘80s throwback’, and we can’t wait to see what the developers do with the concept in the future.

Narita Boy joins a plethora of entertainment franchises that pay homage to ‘80s culture. But where others have failed, Narita Boy transcends its inspiration with exceptional world building, a complex yet thoughtful narrative, and stunning combat gameplay. It occasionally feels a little too vague and abstract in its structure, and ultimately this holds it back from being a true masterpiece, but if you’re longing for a great Metroidvania title, then Narita Boy is absolutely what you’ve been waiting for.