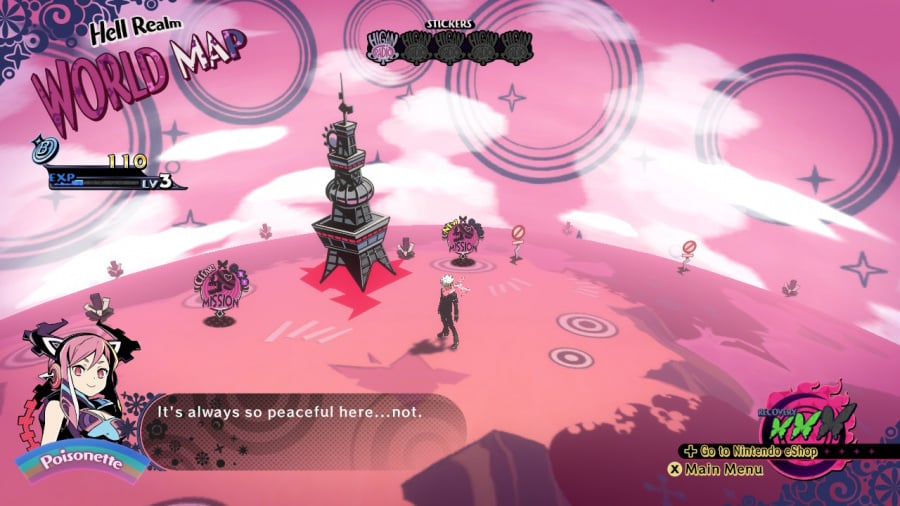 Sometimes the only way to get to Heaven is to go to Hell. At least, that’s the case in Poison Control, the newest game from Nippon Ichi Software to make it to western shores. This single-player action-RPG/shooter has a lot of charm and characters with real personality, though they are a bit cliché at points.

Poison Control starts by letting you choose a bit about your character, including their gender and voice, and then promptly sends them to Hell where they’re attacked by a creature called a Klesha. But its okay, because while most of these monsters seem intent on killing this mortal who has stumbled into their realm, this Klesha merges with the player and the two start a bit of a timeshare agreement with the player’s body.

Poisonette, as the Klesha that has merged with your avatar comes to be called, explains that the two are now Soul Mates, two souls sharing a single body. It’s a condition that comes with certain benefits, including allowing you to shoot poison bullets from their arm to fight the other monsters that are attacking the pair.

Managing the Soul Mates’ condition becomes the bulk of gameplay as you seek to shoot your way through Hell and make it to Heaven as well as find out how they found themselves there in the first place. With the tap of a button, players can swap between Poisonette and their avatar. While Poisonette is in control of the body, she can run around and collect the poison mires that have covered the ground. Not only does this give safe spaces for you to run around while shooting, it also refills their ammo and slowly restores health.

Each level in Poison Control is called a Belle’s Hell, created when a young woman allowed their darkest, most toxic emotions take control of themselves. Clearing these Belle’s Hells will free them from the poisonous thoughts they have been overwhelmed by. There are some dark themes that get thrown out during these points in the game, including a girl who is plotting to kill her mother to bring her dead dog back or a teenager desperate to complete their novel before their best friend and writing partner dies of a mysterious illness.

Completing these portions earns stickers, which can then be exchanged for a ticket to Heaven — at least according to Poisonette, though she clearly has her own agenda for the player’s body. The balance between these two can be explored through occasional text responses from your character, with each one levelling up an aspect of their relationship and eventually unlocking new features and weapons the pair can use against the Klesha that try to stop them from clearing the Belle’s Hells.

The story of Poison Control is mainly told through onscreen text. The writing has its charm and humour, though it does lean a bit into its own jokes at times. The animation bringing the characters to life is minimal, though someone spent a lot of time and effort to bring the jiggle-physics to life. While the game never goes as far into the tropes as the Senran Kagura or Gal*Gun series, the developers clearly had an idea of the kind of aesthetic they wanted to create for this game.

The main disappointment with Poison Control is the gameplay itself. The shooting mechanics are basic and straightforward, but aiming with the Switch joystick is a slow, imprecise chore. Fortunately, there is an auto-aim feature that can assist if you need it, a feature that became more and more necessary as the enemies became more challenging.

The level designs have very little variety aside from new backgrounds and enemies. Though each Belle’s Hell has a different narrative behind it, the basic layout of the battlefields remains the same. There is some variation to the objectives, but each area is ultimately a case of ‘shoot things until you run out of ammo and need to send Poisonette out to clear the poison mires on the ground’. It is disappointing because there is such a charm to the characters, and the story has enough depth to keep our attention, but the gameplay itself quickly becomes repetitive and less interesting than the cutscenes themselves.

That isn’t to say that there isn’t some depth to the game. Different loadouts of weapons can be equipped between missions, including a shotgun-like blaster or a quickfire machine gun. You’re encouraged to explore the levels, looking for money that can be used to upgrade their weapons or level-specific coins that can be used to unlock new weapons. This allows you a bit of customisation and freedom to play the game in a style that best suits you, but it isn’t quite enough to breath life into the gameplay beyond a few similar feeling levels.

Despite shallow gameplay, there is still some good in Poison Control if you approach it as a visual novel with occasional shooting portions, and the story has enough mystery to remain interesting even after the game’s formula has become clear.

Poison Control’s story is cliché-filled but fun, and the tongue-in-cheek dialogue carries the game far further than its gameplay could manage alone. The writing can only make up for shallow game mechanics to a point, though, and ultimately shallow gameplay is what lets this game down. Visual novel fans will likely find more to enjoy here, but there’s simply not enough gameplay depth or variety for fans of shooters.